Everyone loves choices, but no one wants to hear three different ads from three different competing services in a podcast episode. That’s a bad listener experience and just bad business. Luckily, it’s something we can improve so that more businesses feel comfortable shifting more of their ad dollars to podcasting.

It’s safe to say we’ve now entered the next phase of podcast advertising, a phase I’m calling The Accountability Phase. A period of time where we need to truly review how we’ve built our adtech infrastructure and scrutinize our operational processes to be more in line with the rest of the digital advertising ecosystem.

Over the next few articles, I’m going to highlight some of those areas that we should be working to improve. Not individually for each company, but overall as an industry. Because the absolute worst thing we can do is individually attempt these improvements in a way that further fractures how we operate.

So this week, I want to dive into one area that is starting to sting a bit and requires quite a lot of manual work to prevent from happening: competitive separation.

Why Can’t Ads Get Along?

Competitive separation is optional. Not all buyers want it. Not all sellers offer it. Some publishers charge more for the privilege or require a minimum spend. And sometimes, like when multiple and sequential ads from the same advertiser are designed to be placed in one episode, it’s not even relevant.

As you probably already know, most of podcast advertising relies on a waterfall method of filling ads. Whenever a campaign is created, each ad is assigned a priority level (think 1–10), along with other important pieces of information like total impressions, targeting, and frequency capping. At the time the file download request is received, the adserver tries to fill every single slot starting with the highest priority (1) and continuing down to the lowest priority (10).

And it gets a lot more complicated than that.

There are three different executions of podcast advertising: baked-in, dynamic ad insertion, and programmatic. Many podcast hosting services let podcasters use all three. But all three use completely different systems. And not surprisingly, all struggle to communicate with each other.

Starting with baked-in, I’ve yet to come across a platform that allows the publisher to identify in the episode waveform where the baked-in ad starts and ends. Nor do platforms help identify the advertiser and brand associated with that ad. I think this is an incredibly overlooked feature that would give publishers a searchable directory of all the advertisers they’ve run with and which episodes have what ads. Anything that moves us out of Google Sheets and into an order management workflow is greatly appreciated.

So right off the bat, that means that any publisher looking to maintain competitive separation between a baked-in ad and those placed via DAI or programmatic is effectively out of luck and forced to embark on an incredibly manual operations process. Though the likelihood of utilizing all three methods in a single episode is pretty slim, it’s possible. And something that doesn’t need to be a managed exception.

Ensuring competitive separation across both DAI and programmatic is somewhat more straightforward, and we only need a few features to keep things kosher. Starting with the ad itself, we need to know the name of the brand, the IAB content categories, and the web domain associated with the ad.

Getting the name right sounds easy, but it can be tricky. Should it be Dell Technologies, Dell Inc., DELL, Dell Computers, or any number of other variations? Depending on how the platform allows the brand name to be entered, it absolutely would be possible for two adops people to each set up a campaign, one using Dell Inc. and the other using Dell Computers, that wouldn’t necessarily flag each other. Considering all of these brand names are trademarked and publicly available, it’s valuable for all platforms to use a public database instead of letting the adops team write the brand name directly.

And then there are the IAB content categories. A sore subject across all of advertising as very few brand managers seem to know their own brand’s categories. But requiring top-level category selection or multiple lower-level categories can ease that burden a bit.

The domain is really the only easy part, as it’s simply the URL for the brands website.

If a brand truly doesn’t want to be on the same episode as their competitors, they’ll also need to pony up a list of their competitors’ names and web domains. IAB content categories is thankfully covered as they can’t really consider someone a competitor if they don’t share the same categories.

Ads should be placed in listening order, from first to last and from highest to lowest priority. Every time an ad placement gets filled, the characteristics listed above should be added to the filtering requirements for the rest of the ads eligible for the remaining ad placements.

To make that work, the programmatic ads would need to respond back with all of that information, including if the programmatic ad can’t be run in the same episode as their selected competitors. While this does mean the auction was won, it allows the publisher to bypass the competitive ad, which is a completely normal part of programmatic advertising.

Most importantly, a publisher should be able to determine on a campaign-by-campaign and programmatic partner-by-programmatic partner basis what level of competitive separation they want to honor (competitor list only or IAB content categories). Or if they want to honor it at all. Being empowered by technology to offer a solution is vastly different than offering it as a business solution.

And while I’ve absolutely been focusing on preventing episodes from being heard with three different sports betting brands in one episode, this data is incredibly powerful for checking availability before booking an ad and once booked, can help immensely with forecasting delivery.

While maybe not the sexiest feature on everyone’s wishlist, publishers and advertisers should be working with their hosting and programmatic partners to prioritize these features in their roadmap. Welcome to the Accountability Phase. We’re just getting started.

Arielle Nissenblatt of EarBuds Podcast Collective this week has chosen The Broad Experience, hosted by Acast.

For the last week of Women’s History Month, I wanted to recommend a show that explores women’s’ experiences at work. Start with episode 189, “Stop Telling Women to Find an Equal Partner.” It’s honest and heartbreaking at the same time. It reminds us that just because we’ve made lots of advancements in the past few decades, we’re still not where we need to be in terms of pay equity and parity in the workplace. 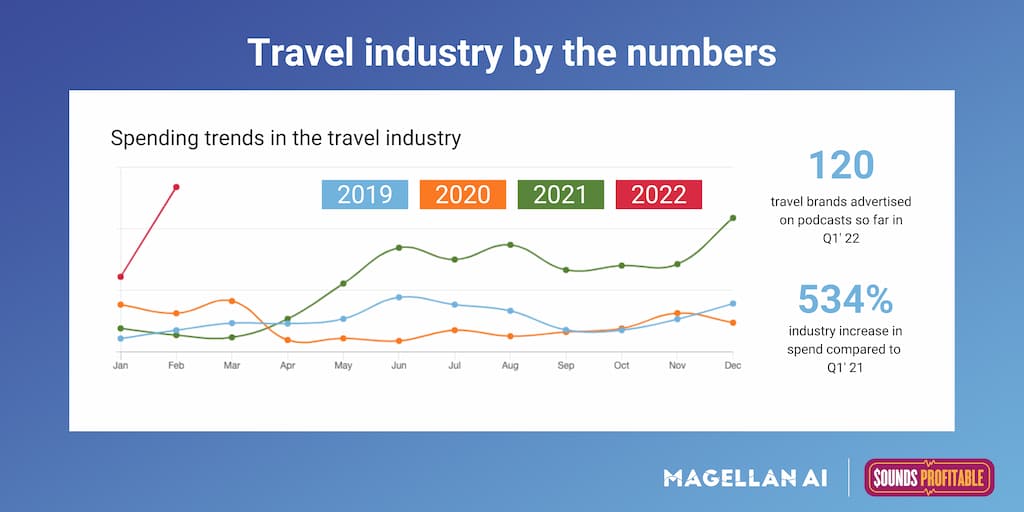 In February the travel industry increased its spend by 112% compared to the prior month. This marks the largest spend increase Magellan AI has detected in Q1 for the the travel industry. Typically it begins to ramp up spend in Q2, around the beginning of Spring as the weather is getting warmer. Driving the increase, travel brands like Priceline and Expedia were promoting off-season travel and deals.

Interested in more industry analyses like this? Join the 15-minute monthly market update on April 22nd where we will look at market trends and highlights for the month of March.

This week’s Anatomy of an Ad breaks down Dunzo!'s ad read of the app Best Fiends.

Podcast Movement Evolutions was last week - we look at the Podnews Report Card … the Infinite Dial 2022, which showed a slowdown in podcast listening … and the winners of The Ambies 2022. Plus, Spotify is testing a new podcast interface. Get the latest every day in your email box.