The essential tool to verify your podcast and YouTube ads run correctly. Audit a campaign for no-cost today.

Pods Heard Round The World

Today’s #GoodData͏📊looks at how non-US markets are driving spoken word audio consumption and why, for publishers playing the long game, having a plan to draw in global audiences will be necessary for sustaining growth. Pack your SPF because, just like summer, podcast listening is heating up everywhere.

Learn how publishers and advertisers can use AdvertiseCast’s MarketplaceWatch to increase reach substantially and get hands-on experience buying podcast ads at scale in this Product Deep Dive. It’s worth a watch!
Suscríbete a Sounds Profitable en Español aquí

Welcome back to #GoodData͏📊, where we explore podcast industry data stories into actionable insights.

For the audio industry, which has a lot of middle-child, “please-don’t-leave-me-behind-at-the- grocery-store” energy—the past few years have been all about securing a seat at the table. Or rather, making a case that audio deserves top billing alongside video, social, and digital.

Today, if you look at the biggest media publishers in the United States, having an audio strategy has gone from optional or “cute and innovative” to essential to compete. But now that podcasting has won over the hearts and minds (see: wallets) of American media moguls, let’s step outside of ourselves and explore how podcast listening is growing abroad.

According to an eMarketer study released in October 2021 and shared by Statista, the number of worldwide podcast listeners has nearly doubled since 2019 – with market researchers forecasting even more global audience growth by 2024. 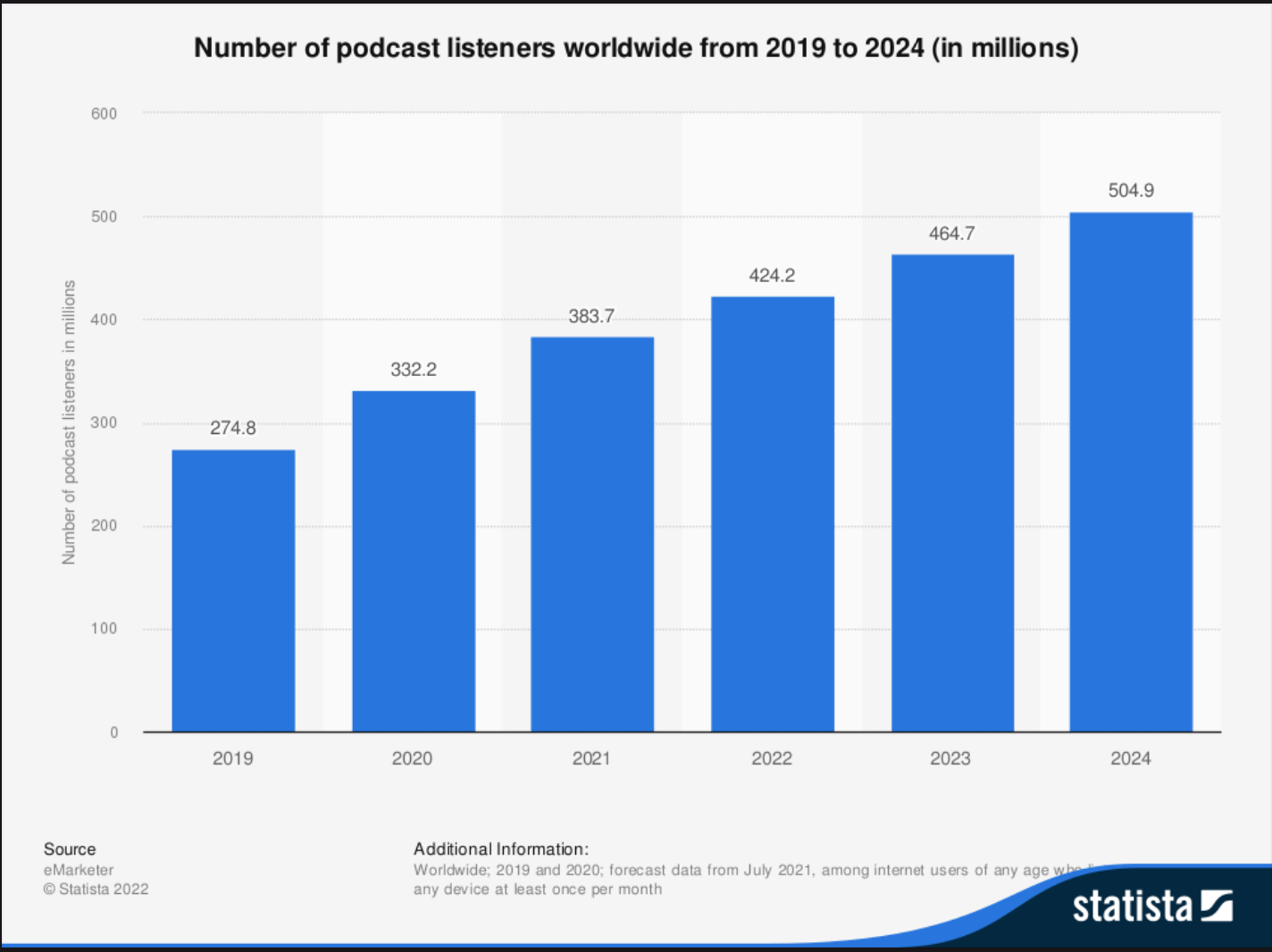 Why should American publishers care about growing non-US audiences?

Back in October 2021, eMarketer’s Ethan Cramer-Flood shared some data demonstrating how the US stacks up compared to its neighbors across the globe.

Pulling from the same eMarketer report, what’s striking about US podcast listeners is how this audience has taken to podcasts at an unprecedented velocity.

With the base so high, experts expect this wave of rapid audience growth and adoption within the US market will slow down over the next few years. Now, this isn’t a bad thing. If anything, it means that podcasting has finally entered the mainstream. As Cardi said, it was up and up and now it’s stuck. But these burgeoning international audiences hold promise. If US podcast publishers can translate existing shows into new languages and market them to a rapidly growing pool of international listeners, there’s a major growth opportunity here. 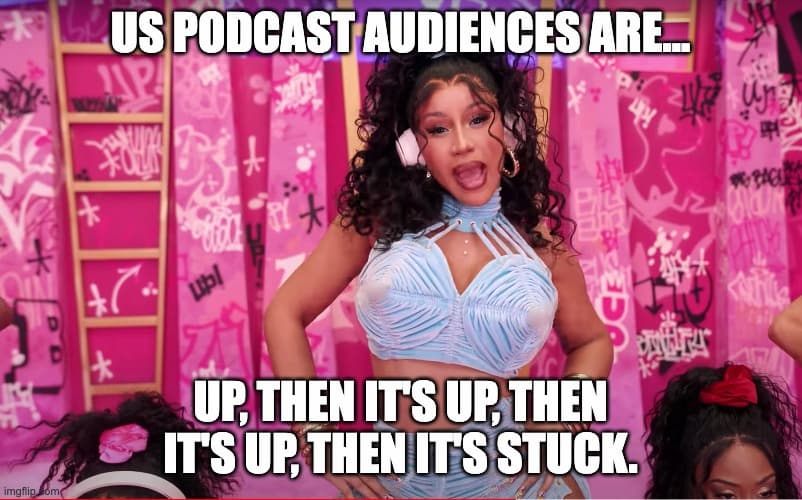 So, which countries are listening to podcasts the most? 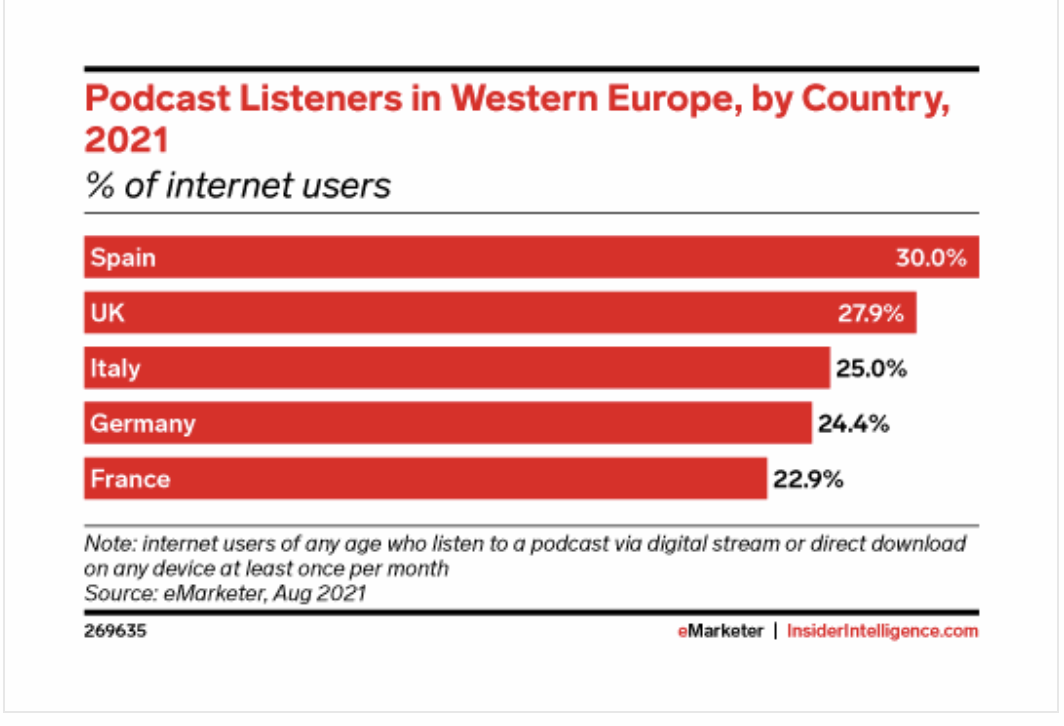 In Western Europe, Spain appears to lead monthly podcast consumption amongst internet users by a hair. Analysts have attributed podcast adoption in Spain to a combination of strategic digital distribution tactics led by Spain’s largest audio companies, along with the vast array of Spanish-language podcasts available from other countries.

How popular are Spanish-language podcasts?

Back in 2020, The Bello Collective did a great profile on howRadio Ambulante forged its own path to success. As the piece by Charlie Clarke details, in the beginning, the idea of a Spanish-language podcast was not well-received by executives at legacy media companies. Back in 2012, when the co-founders Daniel Alarcón, Carolina Guerrero, Martina Castro and Annie Correal began putting the show in motion, decision-makers weren’t convinced that Spanish speakers in Mexico or Spain would turn to an American-made Spanish-language program over their local broadcasts.

Flash forward a decade later, and boy, were those suits wrong. Content has become borderless. Radio Ambulante is one of the most popular Spanish-language podcasts, garnering nearly a million downloads per month – with listeners tuning in from across the globe.

Edison Research’s US Latino Podcast Listener Report 2021 further corroborates this growing market appetite for Spanish-language programming. Last year’s report showed that 33% of U.S. Latinos say they have ever listened to a podcast mostly in Spanish (this is a dramatic increase from 24% in 2020).

Where else are podcasts picking up steam? 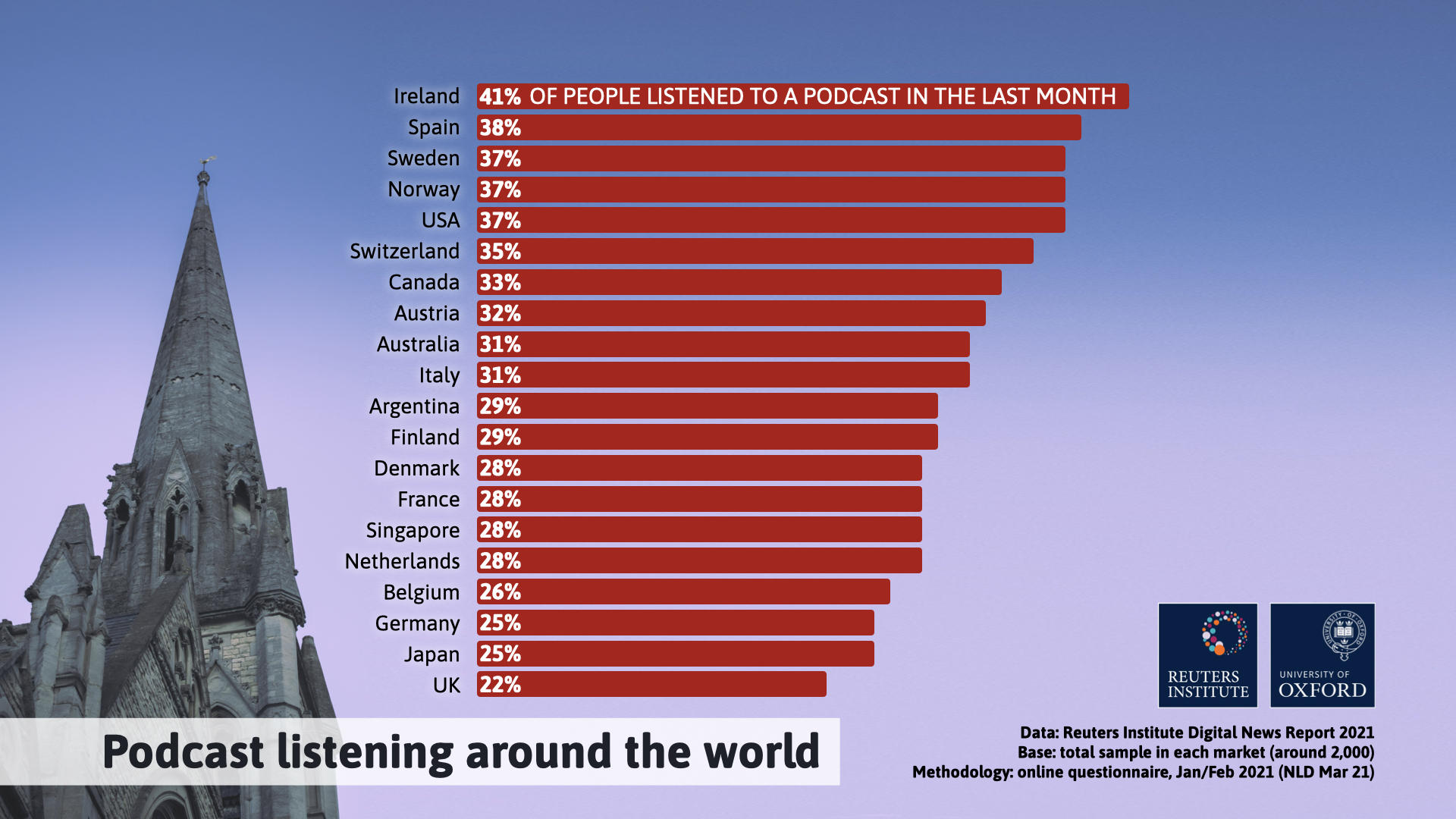 Reuters Institute for the Study of Journalism conducted a digital survey to uncover the percentage of monthly podcast listeners 18+ from across more than twenty countries. (p28). Interestingly, the United Kingdom falls at the bottom of this list—even though I’ve heard many podcast industry people express that the UK has the most mature podcast market in all of Europe. I guess this is true if you define maturity by the number of production companies and/or monetization tools available in English. But, when you remove those parameters—this study demonstrates how non-English speaking countries are blowing the Brits out of the water with their podcast listenership. 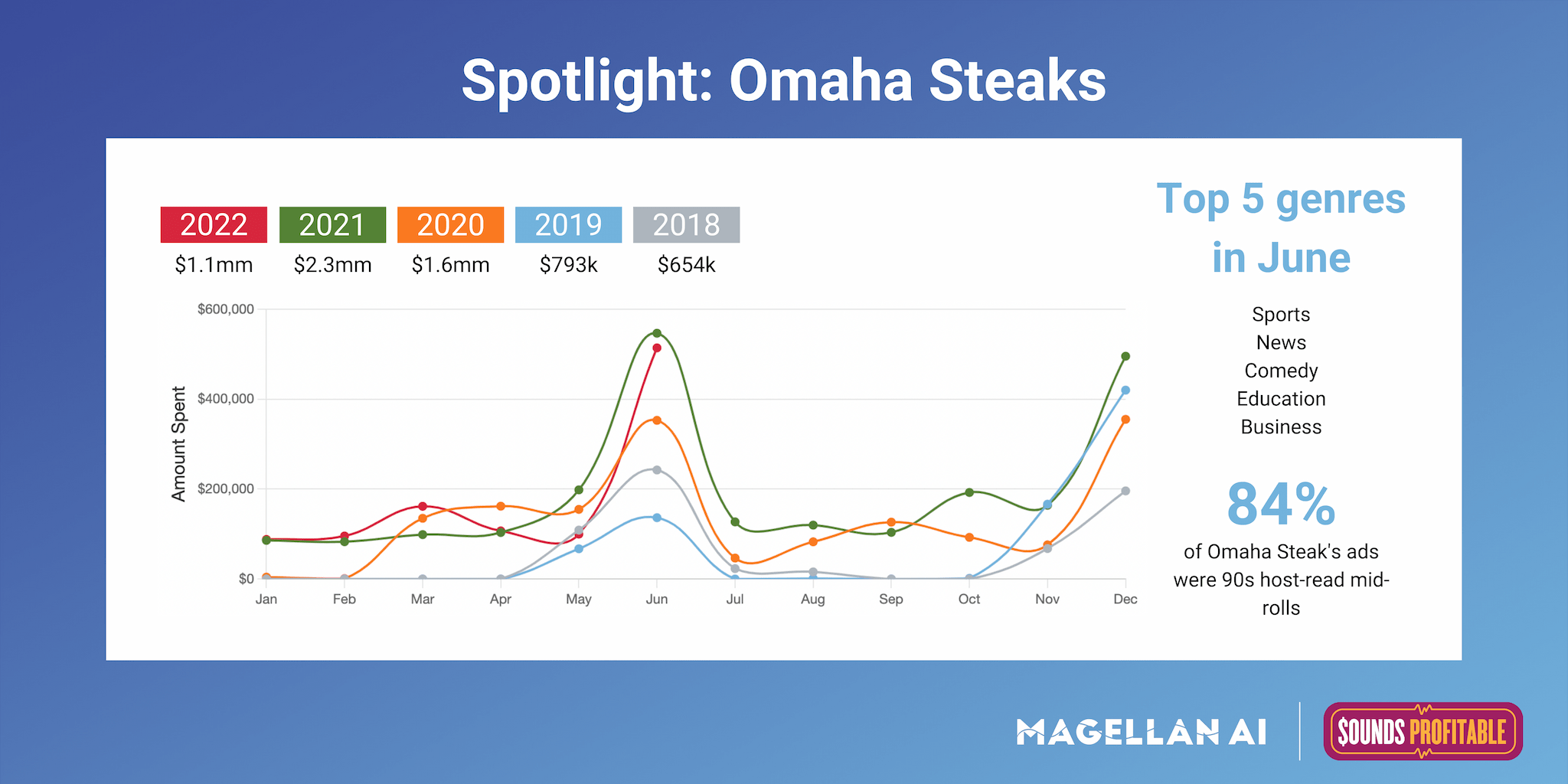 This week we are spotlighting Omaha Steaks, which has been advertising on podcasts since 2017. Since it first started advertising, it has run close to 3000 ads on over 200 podcasts. Omaha Steaks primarily runs 90s host-read mid-roll ads, mostly on Sports and News shows which made up over 80% of the shows Omaha Steaks ran ads on in June 2022.

Since 2018 Omaha Steaks has increased its spend, relative to other months, in June and December. In June 2022 Omaha Steaks increased its spend from $100k in May to over $500k in June, an increase of over 400%. Primarily driving these increases are holidays; Father’s Day in June and Christmas/New Year in December. This is evidenced by its ad reads, in which hosts mention that Omaha Steaks make a great gift for Father’s Day or Christmas, depending on the season. We wanted to highlight Omaha Steaks this week because it is a great example of a seasonal advertiser whose spending habits become easy to predict with Magellan AI’s spend data.

For more insights like this, sign up to join the June 15-minute monthly update today at 11.30am ET.

Where we caught the ad: Latina to Latina - Erika Sanchez is Finding Meaning in the Hurt

Who else has sponsored this podcast? BetterHelp, Athletic Greens, First Republic Bank, and Magic Spoon

Where else has this brand appeared? Naked Beauty and Therapy for Black Girls

Why it works: This is the ultimate pairing—a haircare brand partnering with a podcaster that struggles with her “big bouncy head of curly hair”. Listeners obviously turn to this podcast to hear about all things Latina, and hair is one important topic they cover. So, the brand obviously reaches its ideal target audience.