Which industries are growing the fastest in podcast ads and how are they spending? Download the report

You work in audio ad-tech. So listen to it.

To celebrate one year of Sounds Profitable, James Cridland, Editor of Podnews and the man who took a chance on this crazy idea of a podcast adtech newsletter, reminds all of exactly why we need to consume our own content and use our own tools.

Moomal Shaikh of Oracle Moat joined me in March, 2021, and we had an absolutely amazing conversation about brand safety. Insight from outside of the podcast industry is how we’re going to grow our industry.

A long time ago, I was on the radio: a radio presenter doing the afternoon drive show for a station in the North of England. It was my first job behind the microphone for a radio station, and one thing was drilled into me as I started: I should record my show every day, and listen to it back as I drive home.

The result of all that was, after four hours of playing songs and saying the odd thing in-between about the state of the roads, I had a little cassette every day of about fifteen minutes of my work, which I’d put in the car’s cassette player (ask your dad). I’d listen to myself as I drove home. Sometimes chuckling heartily at my jokes, but more often than not cringing at a particularly poor way of phrasing something, and vowing to do better next time.

One of my personal lows, since you wondered, was playing Hazel O’Connor’s Will You, generally acknowledged to have the best saxophone playing in recorded music (though to my ears a bit of a whiny dirge), and talking over some of the two-minute saxophone solo that finishes the track with the hilarious quip: “Ah, there’s nothing better than a bit of sax in the afternoon!” The programme director actually came into the studio to shout at me for that. #proud

Anyway. The point of all this isn’t that the track ends rather than fades so really I shouldn’t have talked over it at all, much less making a hilarious pun on the word “sax”, ah, hahahaha, I was only 19 - no, the point of all of this is to consume your own product like your audience does.

In the radio world, that’s recording your live broadcast and listening back to it later. In the software industry, that’s using the next version of your own software to achieve your goals, as a great big beta test. Software companies call this “dogfooding” - apparently after a pet food salesman started eating his own dogfood in sales meetings with potential buyers. But whatever you call it, it’s a vital thing for ad-tech to listen to your stuff.

A while ago, I used to own a Samsung smart TV. It worked quite nicely, but the apps on it were clearly not the most updated or maintained things you’ve ever seen. Samsung has a market share of 29% in Australia, but that means more than two-thirds of TV owners have something else, and that’s before the fact that most people use set-top boxes like a Chromecast, or a Foxtel box - a satellite TV box like DirecTV but owned by Rupert Murdoch instead of AT&T (and if you think being owned by AT&T is a bad thing, you should try anything owned by Rupert Murdoch).

So, the Samsung smart TV had a number of TV catchup apps on it, including one for Channel 7, a large broadcaster here in Australia that broadcasts on channel 70 (don’t ask). I was watching a show on Channel 7, and it went to an ad break, where it showed me an ad for the Channel 7 app on Apple TV.

It made the TV show unwatchable - because there’d been no frequency cap placed on the ad. It was also a frustrating experience because I didn’t NEED the Apple TV app, since I already owned a Samsung smart TV with the app built-in. Badly targeted, and poorly scheduled.

Nobody at the television company was watching their catch-up services using a Samsung Smart TV. They might have one in the office to develop on, but they’d never sat down and watched a program on it, clearly. And it was deeply frustrating. (They’ve since fixed it).

Skip forward to July this year.

I was driving and listening to a podcast. The podcast was accompanied by the rumble of the tyres on the road; and the quiet purring when the hybrid engine cut in.

The hosts said something like “we’ll just hear from our sponsor”, and all of a sudden, it went very quiet.

The tyres on the road kept rumbling. The engine was just about audible - I’m enjoying listening to the sound of the last petrol engine I’ll ever own. And really, really quietly, I could just about hear a man telling me about some insurance website.

I lean forward and turn up the volume. Yes, there’s a bloke with an exceptionally thick Australian accent telling me about an insurance website that I’ve not much interest in. I don’t skip the ad, since experience has taught me that this’ll be over before long. The bloke tells me the website address, and then repeats it.

And then all of a sudden my car is FULL OF REALLY LOUD NOISE AGAIN as the dynamic ad finished playing and the podcast continued.

Because I’m a deeply tedious person, I got home, downloaded the podcast, and put it into Audacity, to notice that it looked like this: 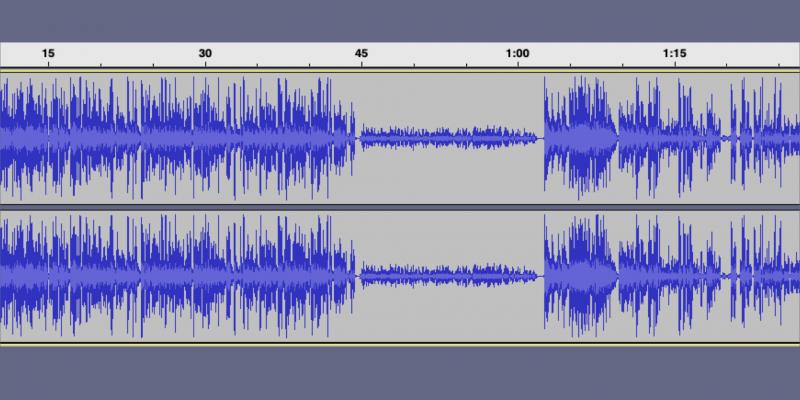 Can you see the ad? Yep, it’s that bit there. It’s 13.8dB quieter than the show that surrounds it.

A one-off issue, you’re probably thinking: but no, this podcast (a top ten podcast in Australia) has had this issue since October 2020. Every single week, the dynamically-inserted ad has been this quiet.

Please listen to your stuff

Adtech can be complicated. Lots can go wrong.

It’s easy to mess up the loudness level of a dynamic ad, and to inject something at -24 LUFS (broadcast radio loudness) instead of -16 LUFS (podcast loudness). It’s really hard to notice this happens unless you’re listening. (Here’s more about loudness if you’re interested).

It’s easy to mess up ad copy. During the Olympics, I enjoyed watching an ad for a new movie that excitedly proclaimed it was “in cinemas on Christmas Day”, but did wonder about why they’d be advertising this far out (before realising that it was just outdated copy for a movie that would have been out last year).

It’s easy to mess up your frequency cap, and give the same ad to the same listener multiple times. You can get away with doing this twice, but after the fifth time of hearing the same ad in half an hour, it’s no longer an interesting glimpse into a product or service I might want to buy, and is instead a fist-clenchingly irritating experience which I’m blaming the advertiser for, not the ham-fisted scheduler.

It’s easy to oversell the ad slots you have in, say, New York NY - but to undersell the slots you have in, I don’t know, Akron OH. That can often result in the good people of Akron OH hearing the same clumsy filler ad over and over again, but because you’re based in New York NY, you never hear the filler ad once. Dave in Ohio is getting very bored of Smokey the Bear telling him not to set fire to the forest, but without you listening to your stuff (and spoofing a geo-location that isn’t where your office is based) you’ll never know what Dave’s going through.

It’s also easy to sell inappropriate ads into shows sometimes. I can’t be the only afternoon radio DJ who wasn’t listening to the news bulletin covering about a large fire in the centre of the city, and came out of the news bulletin playing this song by Arthur Brown. The same thing happens to ad placements too - I’ll bet that this week we’ll see at least one ad for airline tickets being dynamically inserted next to tributes to the people on the 9/11 flights.

It’s easy to mess this stuff up. But it’s also easy to spot. As long as you listen to your stuff.

What else is going on… with Podnews

US podcast ad spend is up by almost a quarter in the first five months of 2021. RedCircle, which sells host-read or programmatic ads, has landed $6m in funding. Magellan AI has partnered with Ad Alliance to analyse over a hundred podcasts in the German-language podcast market of Germany, Austria and Switzerland. And NZ On Air, the New Zealand government’s media funding service, has also released media consumption data - 13% of Kiwis listen to podcasts daily; it’s one of only two media types to have increased in the past year. Subscribe to Podnews.

Our sponsors support a collaborative and educated podcasting space and are committed to raising up the whole industry together. Find out how you can become a sponsor today