Welcome back to #GoodData͏📊, where we decipher podcast industry data stories into actionable insights. This month, we’re diving into what type of podcasts have the most success selling ads.

This week on Sounds Profitable: Adtech Applied, Bryan and guest Jordan Bentley of AudioHook discuss transparency in programmatic advertising. Can podcasting/audio start things off the right way and avoid the fate that legacy media is now tied to? Find out!

At eight o’clock on New Year’s Eve 2014, I was shuffling around my Brooklyn apartment in pajamas. The plan? Stay home. Go to bed early. Start the year off right, like a total schmuck. Then, somehow, between that tame scene and the stroke of midnight, I accepted a marriage proposal from a total stranger.

Go with me here…but this night changed my entire career trajectory. My bossy roommate lured me out of the house and to a party that could have been an episode of The Bold Type or Younger. Every cliché media personality was in attendance. Between cringeworthy conversations about Twitter followings and book deals, I fell in love with this industry of charming degenerates. Six months later, I flushed my multi-year stint in EdTech down the toilet and found myself building marketing decks for a tiny newspaper. Ah, so glamorous.

What no one at that NYE party told me…? The publishing business is very much a divided house. There’s a thick red line between advertising and editorial operations. It’s a well-documented perimeter, kind of like the DMZ or the equator. This lack of conversation and information sharing between the two worlds serves an important purpose. Legitimate newsrooms cannot be privy to advertising operations, lest they be swayed by a high-paying sponsor’s whims. It’s about integrity.

But for an industry frequently described as “dying” or “in decline” or “totally f**ked” (that last one was me) – strictly upholding this tradition, especially in a blurry new media landscape, becomes a double-edged sword. Producing great editorial work requires an investment. For ad supported media outlets, that means selling smarter, better, more effective ad programs. And for the podcast advertising ecosystem, which the IAB projects will represent a $2 billion market by 2023, that means it’s time for publishers to get crafty.

So, let’s party over the line. What types of podcasts do audiences want, that advertisers will buy, that editorial leaders should prioritize when building new programming? It’s a tricky forecast but the numbers tell a rich story. Some insights will seem obvious but are worth reinforcing. While others are less noticeable, until you look at the data.

First, let’s unpack the obvious. What makes some podcasts so darn appealing to advertisers?

Cast a solid host. Find a personality who listeners connect with and trust. It’s easier said than done, but the right voice builds podcast programming that scales. Dan Misener of Pacific Content, already wrote the blueprint for what you should be looking for, here: What makes a great podcast host?.

While podcast ad tech has become more sophisticated, reducing the industry’s reliance on host reads – the host read will never go away. In fact, as podcasting grows, the ability to leverage a host’s authoritative voice will yield more premium rates, making this ad product even more lucrative for publishers.

Why? Because the devil works, but the host-read works harder.

The power of the host read, by the numbers:

According to the Q4’21 Magellan.AI Benchmark Report the top 500 podcasts that they measured garnered 54% of the total ad spend last quarter. Within the sample size measured by Magellan, a leader in the podcast industry, this breaks down to an estimated average of $236k in advertising spend per month on podcasts ranking in the top 500. Meanwhile, podcasts ranking between 501-3,000 measured by Magellan generated an estimated average of $30k per month in ad revenue.

So, what makes a “top” podcast? A massive audience. There are a few independent charts that try to make sense of where the industry’s more than 2 million shows stack up. Here are a few worth exploring:

I’d be lying if the top ten to fifty shows differed vastly from week-to-week on these charts. Podcasts like NYT’s The Daily, which as of late 2020 garnered 4 million daily average downloads, typically hover at the top. And it’s absolutely true that marketers aim to ensure their messaging achieves healthy reach…but for publishers planning new podcast launches, it’s daunting and frankly, not productive to think about competing with these juggernauts.

How about some more hopeful podcast data for new and growing shows?

Podcast ad buying is shifting away from simple mass-media reach plays to keep up with evolving listener behavior. According to the Nielsen Q3’21 Podcasting Today Summary, “brands should not approach podcast advertising with traditional, mass-media reach strategies.” Nielsen goes on to advise that advertisers yield the best outcomes in this channel when pairing their messaging with the right audiences, in the most contextually relevant environments.

Diversification is key for effective podcast ad campaigns. Podsights, in their Q1’22 Benchmark Report, echoes this sentiment – reporting that conversion rates within the campaigns they measure (which, honestly, is the majority of tracked campaigns) were highest among advertisers running across multiple publishers, or networks.

Presumably a byproduct of pandemic times and audiences developing more complex media diets, this segment of the podcast audience is a departure from the historical “power listener” profile. Lighter listenership, combined with the need to pair messaging with programming that reaches the most strategically relevant audience, across multiple publishers – rather than a few shows that reach the masses – bodes extremely well for new show launches.

What sorts of podcasts should publishers seriously consider greenlighting?

These promising ad spend trends, combined with the well-documented intimacy of podcast listening, make it a uniquely perfect channel for unpacking sensitive health and wellness topics. And while there are a number of shows under this vast umbrella, publishers looking to explore programming here will certainly find an influx of new and existing audio advertisers ready to pay for this ideal contextual alignment.

More podcasts that pair with shopping at Target

Consumer Packaged Goods (CPGs) is probably the most ambiguous ad category. Depending on your definition, this could be anything from razor blades to canned soup. As someone who lives directly across the street from a Target, I think of CPGs as the “anything you can buy at Target” ad category….and it’s having more than a moment.

Returning to the Podsights Q1’22 Benchmark Report, CPGs yielded a ~28% conversion rate for lead events from attributed visitors measured by the independent attribution partner. The highest of all the ad categories measured, this means that compared to Retail/DTC, B2B, Auto, Financial Services (etc.), listeners were more likely to take an action when the ad pertained to a CPG product, according to Podsights.

Armed with the knowledge that CPG advertisers perform and spend in the podcast ecosystem, there’s a huge demand for more contextually relevant programming. It’s an open field for new food and cooking, home design, and beauty / self-care product recommendations podcasts to take the stage. If you build it, CPGs will buy it.

A few honorable mentions, that frankly deserve articles of their own:

Women control or influence 85% of all consumer purchases (Forbes)

Not to leave you hanging during this Valentine’s Day week, I’ll tie a bow on the story of my engagement. My New Year’s fiancé and I are now happily married… to different people.

Sources referenced in this article:

Arielle Nissenblatt of EarBuds Podcast Collective this week has chosen Cover Story from New York magazine, hosted by Megaphone and measured by Chartable and Nielsen.

Psychedelics. This podcast takes us on a trip to explore the potentially restorative, sometimes sinister, and increasingly corporatizing new world emerging from micro-dosing and psychedelic therapy. But it’s not just about scandal, danger, and euphoria. Cover Story also brings in personal stories and reckonings. Host iO Tillett Wright and collaborator Lily Kay Ross take us through this twisted tale. 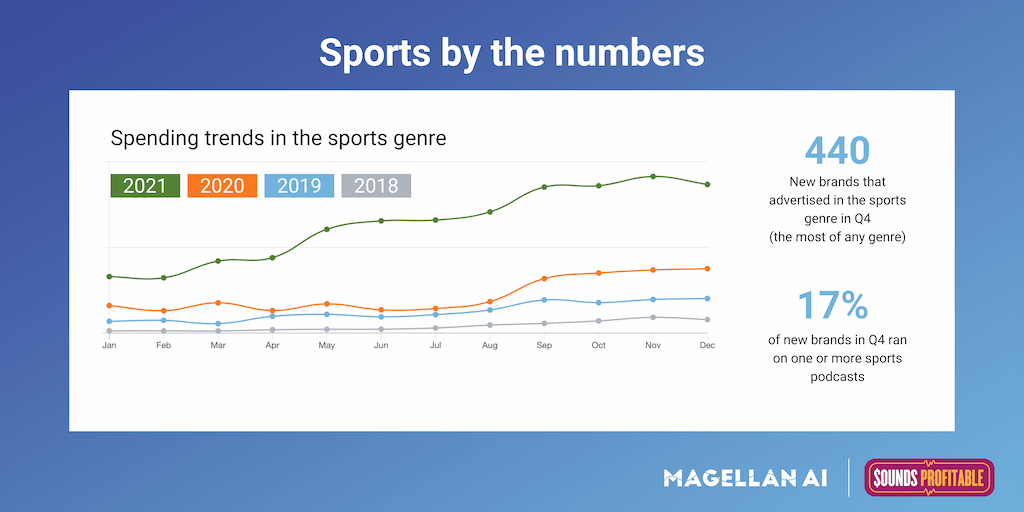 We heard there was a football game this past weekend - how do sports and podcasts play together?

The fantasy sports industry and the sports genre have come up more than once in our analyses: DraftKings and FanDuel made appearances on our monthly top 15 spenders list in November and December, and our Q3 Podcast Advertising Benchmark Report highlighted Fantasy Sports as the fastest growing industry that quarter. That hype spilled into Q4 with spending in the sports industry hitting a new high in November 2021.

See what other genres were popular with new advertisers in our newly released Podcast Advertising Benchmark Report for Q4!

This week’s Anatomy of an Ad breaks down a host read ad for Native presented by Grace Helbig and Mamrie Hart, hosts of the podcast This Might Get Weird.