As podcasting grows, more and more “Hollywood-like” deals are being minted, which look quite similar to legal arrangements for films or television shows. And that’s not a great thing. Podcasting has its own unique qualities. Qualities that justify a unique type of deals that work just for podcasting.

Check out the deep dive with Adori Labs and find out how their new technology makes turning audio content into YouTube content a breeze! Watch now!

During the “Business of Adaptation” panel at Podcast Movement Evolutions 2022, Donald Albright, co-founder of Tenderfoot TV, cautioned the audience not to let the podcast industry turn into the film/tv industry where “they tell you how it’s done.”

Donald raised a good point. As a lawyer working on both film/tv and podcast deals, this made me wonder: has the shift already taken place, and if not, is it coming? (spoiler alert: “no” and “doubtful”)

Let’s take a quick detour at the anatomy of a typical deal in each of these industries.

Film/tv business affairs executives and lawyers operate within well-defined parameters that have been developed over decades. There are exceptions to every rule, but film/tv deals between talent and the commissioning studio/network/streamer follow a certain formula:

To be clear—there are practical realities and business justifications that have driven this model (more of this below) and the rights are not granted for free. Depending on the talent’s leverage and position in the industry (or their deal “precedents” in Tinseltown speak), these rights are bought out by buyers for amounts that range from thousands to millions of dollars in the form of fixed payments, royalties, and percentages of back-end. But the general framework of a “Hollywood talent agreement” is predictable and to date, largely evolution-proof.

In comparison, there is no single “formula” that dictates the shape of a podcast deal between a production company and the host. But such deals are generally more likely to offer wiggle room on one or more of the following:

The above answers my first question: no—podcast deals have not yet turned to film/tv deals as the default way of doing business.

But what is driving these differences? A number of reasons come to mind:

1. The DNA of the medium

While movies and television shows contain a cast of beloved characters, podcasts are often built around one or more individuals: the host(s). Podcasting is the quintessential “creator-first” medium, with the host/audience relationship being one of the most intimate relationships in the media space. As opposed to content unfolding on a screen, the voice of the host is in your ears, on the move with you, during your commute, or going about daily house chores. At the time of writing, at least, audience loyalty seems more driven by a connection with the host than the platform. Contrast this with streamers, where one’s affinity for the Netflix or Disney+ brand or the breadth of content can be a greater driver to subscribe and/or stay loyal to the platform, more so than any individual piece of content (Squid Games and Baby Yoda excepted).

Structuring agreements in such a way that hosts are incentivized to keep making and promoting a podcast (read: captivate and retain an audience) is perhaps more of a consideration in audio deals than it has traditionally been in the film/tv industry.

2. The importance of host-read ads: Let’s consider a few stats.

Articles analyzing the reason for the success of host read ads all hit on the same point: the ads tap into the host-audience trust (discussed above) that is central to the podcasting medium. James Cridland, Podnews’ editor, summed it up nicely at yesterday’s The Radio Advertising Summit; podcast advertising keeps growing because “for brands, it’s a much more human and personal way of marketing than press or radio. It’s literally marketing by word of mouth”.

While film/tv producers cast and rely on top talent as a driver for success and talent will have certain contractual promotional obligations (e.g. social media promotion, interviews, and press tours), in podcasting, the talent is central both to promotion and the distribution model itself. Does this primacy of the host create greater leverage in the negotiation of podcast deals than their creative counterparts have in other mediums? Quite possibly (at least in the United States where advertising-based subscription is still the main way podcasts are consumed, compared with Europe, where subscription offerings are increasingly on the rise and where platforms may need to convince podcasters to go behind the paywall, which raises difference leverage considerations).

3. The lack of the middleman

How content flows from the creator to the end-user is important context to how deals are structured in the first place. Platforms like Apple Podcasts, Google Podcasts or Spotify facilitate access to our favorite podcasts but are not necessarily as integral in the content production and distribution process.

The traditional television business, on the other hand, typically requires successive transactions and agreements between several entities to develop (talent), produce (talent/studios), market, and ultimately distribute (networks/broadcast stations/MVPDs) content to the consumer. Similarly, the theatrical business involves a series of agreements with distributors and movie theaters across territories, which dictate where and when users first consume content. The initial party contracting with talent in the film/tv industry, therefore, has traditionally obtained all rights to and control over the IP and decision-making to be able to enter into such successive transactions with the least friction and encumbrances possible.

In contrast, while podcast production companies have to agree to a platform’s terms of use, through wide RSS-feed distribution, podcast content can be made available from the host or podcast production company to the user directly, without any assignment of IP rights. This simpler distribution model may be enabling greater flexibility in structuring those initial deals with the host/talent.

2021 saw the increase of what can be described as “hybrid” distribution deals with audio platforms. The My Favorite Murder and SmartLess Amazon deals are good examples: new episodes of the podcasts are offered exclusively on Amazon Music and Wondery+ for one-week windows before they become widely available across platforms. Once the podcasts go to wide RSS distribution, Amazon retains exclusive ad sales rights to that podcast. This means Amazon benefits twice: first from the added value to its subscription service and second from the platform’s ability to generate revenue by selling ads against the podcast, regardless of where the podcast is then accessed.

While the concept of windowing is present in film/tv, where shows are exclusively available on the original network for a period of time before being licensed for a fee to a third-party network/channel/platform, (i) the entity benefiting from the windowing scheme is generally the entity who packaged the show, not the talent/creator, and (ii) the entity licensing the rights does not retain ad sales rights for those third-party distribution endpoints. But if you can convince a licensee that you do not need to sell or transfer all of your rights to your content for the content to be valuable to the licensee, as podcasters can and do, you have much better chances of holding on to your rights as the creator (i.e. close a deal where you don’t hand over your IP fully or and/or assign all distribution rights forever).

In Hollywood, it typically takes a Scarlett Johansson/Disney-level contractual dispute for the inner workings of an agreement to come to light. Contrast this to the podcast community, which has not hesitated to shine a spotlight on deals where hosts have not been allowed to retain or participate in the IP, access their RSS fees, or share in their show’s success. There appears to be a genuine and continuous discussion amongst creators but also between creators and companies or networks on how to maintain a creator-friendly medium and a creator-driven economy.

Whether due to its genesis as a creator-first medium or the flexibility offered by hybrid and more direct-to-consumer distribution models, podcasting deals are not necessarily destined to replicate film/tv deals. From my perspective, that’s a good thing. There are many positive business practices and interesting models that can be learned from in the film/tv business, but the beauty of podcasting deals is also the opportunity for us, as a legal community, to be a little creative.

How do we negotiate deals that truly advance both parties’ interests, versus ones that easily fall into decades of negotiated Hollywood precedents and habits? Who really needs to control the IP, and when? What terms are required to protect both the investor’s financial risk and the IP holder’s creative incentives? Not easy questions to answer, but we are fortunate to operate in an industry that has been built and shaped with these questions in mind, so let’s keep asking them.

The latest Jamie Loftus drop is here! Loftus is a comedian and a hit podcast producer and host many times over, having put out the following intriguing titles just in the past few years: My Year in Mensa, Lolita Podcast, _Aack Cas_t, and more. Her hosting style is quick-witted, sharp, and she packs a ton of information into each episode. In her latest, Ghost Church, Loftus looks into the religion of American Spiritualism. She spends time in Florida, at a camp where mediums congregate and practice their religion. In episode one, Loftus breaks it down for us: American Spiritualism is not a cult. But, what is it? Come for the title and the creepy podcast artwork, stay for the Loftus style that so expertly brings together comedy and quirky sound effects. 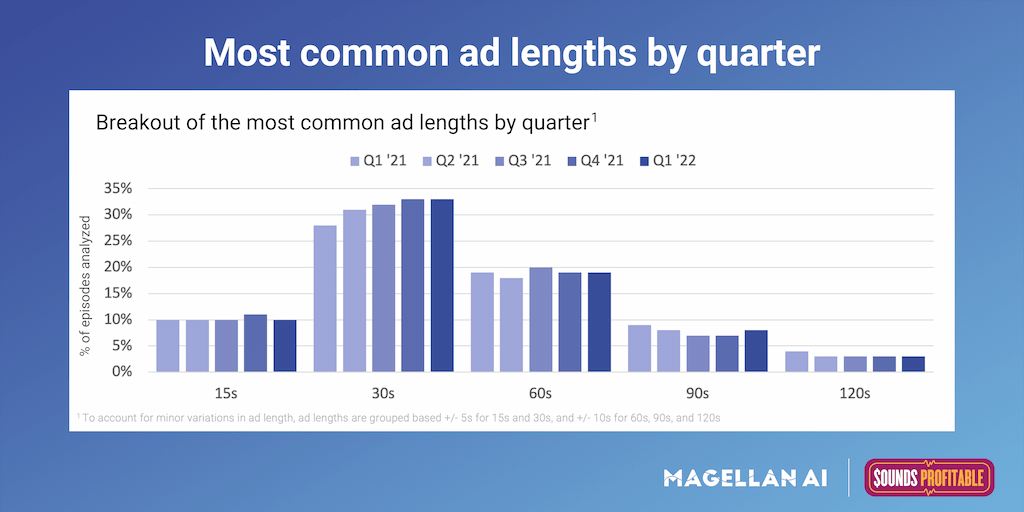 This week Magellan AI released its Q1' 22 Quarterly Benchmark Report. In the report, we detail some notable trends in advertiser spending, podcast activity, and much more.

In this graph, we have broken out some of the most common ad lengths and rank their popularity in relation to each other and over time. While most ad lengths have been relatively flat since Q1' 21, 30s ads have had a notable uptick. The rate of 30s ads has increased by 5% since Q1' 21, up from 28%.

This week’s Anatomy of an Ad breaks down a host-read for Munk Pack presented by Mandy Edmonston and Melissa Rice, hosts of the podcast Moms and Murder.

Facebook has binned podcasts on the platform, and will shutter podcasts entirely next month. No reason was given (and no official announcement made) … Michael Mignano is to leave Spotify - he was the co-founder of Anchor. He’d been with Spotify for three years, four months … Spotify’s Podsights released a benchmark report suggesting that the optimum number of times a listener should hear your ad is 2-5 times … and data from Canada, and from Spotify both appeared at the same time - the first ranker from Canada, and impressive figures from Spotify that nevertheless disappointed the market. Podnews is free by email every day.