How Kast Media used two top-10 launches to provide a guidebook to podcast marketing via cross-promotions—from the beginning of the planning phase to launch week.

The Creators is here 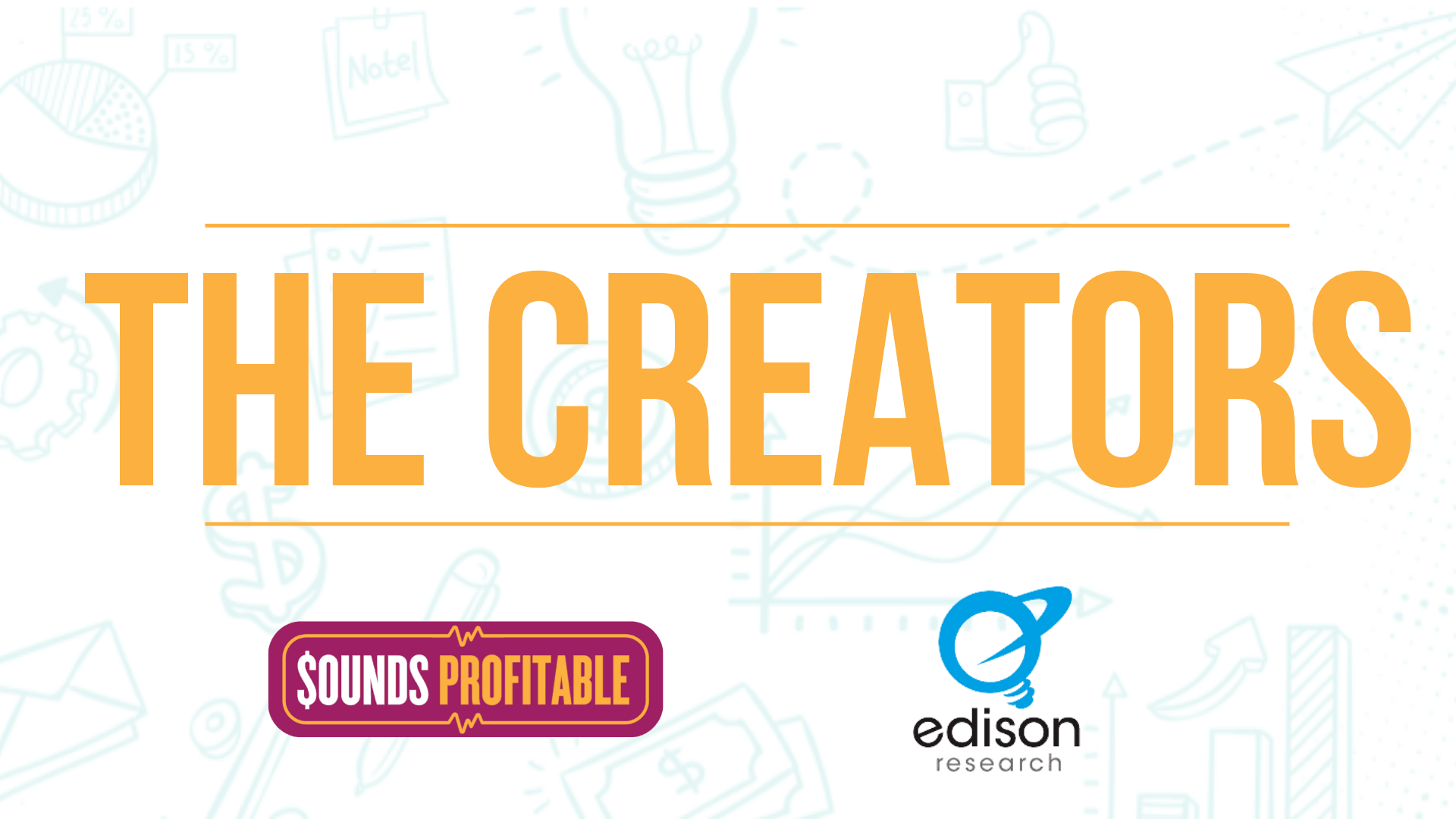 The first-ever credible study of the people who create podcasts is here! Presented in partnership with Edison Research, this in-depth report gives key insight into the demographics, psychographics, and more of the U.S.-based podcasting community. Download it today, here

As one of the largest independent networks in podcasting, our goal at Kast Media is to take a very thorough and robust approach to every single podcast launch at the company. With this, my role is to ensure that each podcast has an extremely thorough marketing plan built—and executed—through cross-promotional ads, press, interviews, and podcast app placement. With two major narrative entries in the past 14 months at Kast, I built a roadmap of how to plan and execute a successful marketing campaign for a podcast of any size and analyzed the success.

Starting in 2021, we launched our first major, fully original narrative show, The Opportunist. Three months out from the launch date, an extensive marketing campaign was put together. While there were a lot of elements critical to the success of this launch—press release distribution, podcast app placement, a modest spend of paid ads—the tentpole of success and charting was cross-promotion ads both in and out of network.

In order to get to launch day, you have to first start with the early beginnings of the marketing plan and initial outreach.

This process always begins with approaching any contacts that you have built at other podcasts, both networks and independent creators, to gauge interest and mutual opportunity.

Begin by determining how many ad impressions you would like to meet for launch week; this can be estimated by the number of network partners you plan to approach. For The Opportunist, our goal was 5–7 million impressions within the first month of launch.

Once you have your marketing guide developed, it’s time to send a show description and trailer to network partners, letting them know that you are gearing up for a launch and would love to discuss impression trades. The most important item to consider in cross-promotional campaigns is making sure the exchanges are equal and mutually beneficial.

There are a few important items to consider: placement, impression limit, and type of ad. Placements can include pre/mid/post-rolls and, in certain circumstances, feed drops. Unless otherwise agreed upon, each ad should be the same placement for the exchange, as every spot placement has a different conversion benchmark. Impressions should also be equal for the exchange, so it’s best to estimate how large you think the show will be and discuss the exposure level that is likely to be met and mutually beneficial for both parties.

Lastly, the spot could be host-read or a pre-recorded trailer and should, again, be the same across the board, based on the interests of both parties.

If you are newer to the space and have not approached others about cross-promotion campaigns before, the Apple Podcasts’ charts are a great place to start to find new, similar shows. Choose your genre, scroll through the charts and write down any show and/or network that has similar content to what you’re going to be launching, one in which you think both sets of audiences would be interested in converting to the new content. As noted, cross-promotional campaigns are built to be mutually beneficial for all, so the more shows and partners you approach, the more likely you are to have a solid network down the line for new launches.

There are also opportunities to think outside of the box and mimic ad trades in a more unique way. For The Opportunist, we approached true crime YouTubers about doing an exclusive promotion for the podcast and covering the case in an upcoming video. We mailed each YouTuber a package wrapped in The Opportunist wrapping paper and filled with materials about the series and crime. They performed an unboxing to their viewers and told a quick synopsis about the crime and podcast, driving their extensive true crime audience to the podcast page.

Now that the bulk of the work has been done and marketing has been confirmed, the next step is tracking and analyzing all of the results.

How It Worked For Kast

After the marketing plan was built, partners were approached, and cross-promotion deals were exchanged and solidified; we made sure to track every campaign that we could in Chartable. Using the amount of impressions agreed upon, we built a marketing prediction guide listing every campaign that would be running, the impression number that would be hit, and our predicted conversion rate based upon Chartable benchmarks for true crime.

Immediately at launch, The Opportunist broke into the top 20 overall and top 5 in True Crime on the podcast charts and quickly amassed over 1 million downloads within the first month. Outside of a very modest marketing spend, the bulk of the campaign was built upon cross-promotions—internally and externally—which is what landed us that type of massive launch.

30 days after the launch, we plugged the actual conversion rates into our marketing prediction guide, creating an extensive guidebook for future launches. Using our conversion estimates, we found that some ads converted at much higher rates, some at much lower, giving us learnings about which shows convert best to the genre, which don’t, and which are highest performing (meaning, they perhaps have a more engaged fanbase).

As of a couple of months ago, we began planning for another major original narrative launch with our show Vigilante. We used all of our learnings from The Opportunist to shape our marketing build, as the genre is the same and Vigilante is from the Executive Producer of The Opportunist, so we knew it would be a content match. We re-approached the highest performing shows and also expanded our reach using Apple Podcast’s discovery tools to find similar shows and new cross-promotion partners. Vigilante launched at #8 in overall podcasts, remaining in the top 10 the entirety of launch week. Of note, The Opportunist was one of our highest converters to the new show, converting well above average benchmarks, showing us the extent of the engaged, trusting audience we had developed over time.

Cross promotional plans can be built by anyone from major networks and shows to even the newest of podcasters, and used to expand their reach. Impression exchanges can be of all sizes—large and small—and used throughout the lifetime of the podcast to continue to receive new listeners. The most important beginning is developing a plan of your goals, approaching partners of similar sizes, and tracking progress as you go, in order to develop better strategies over time. 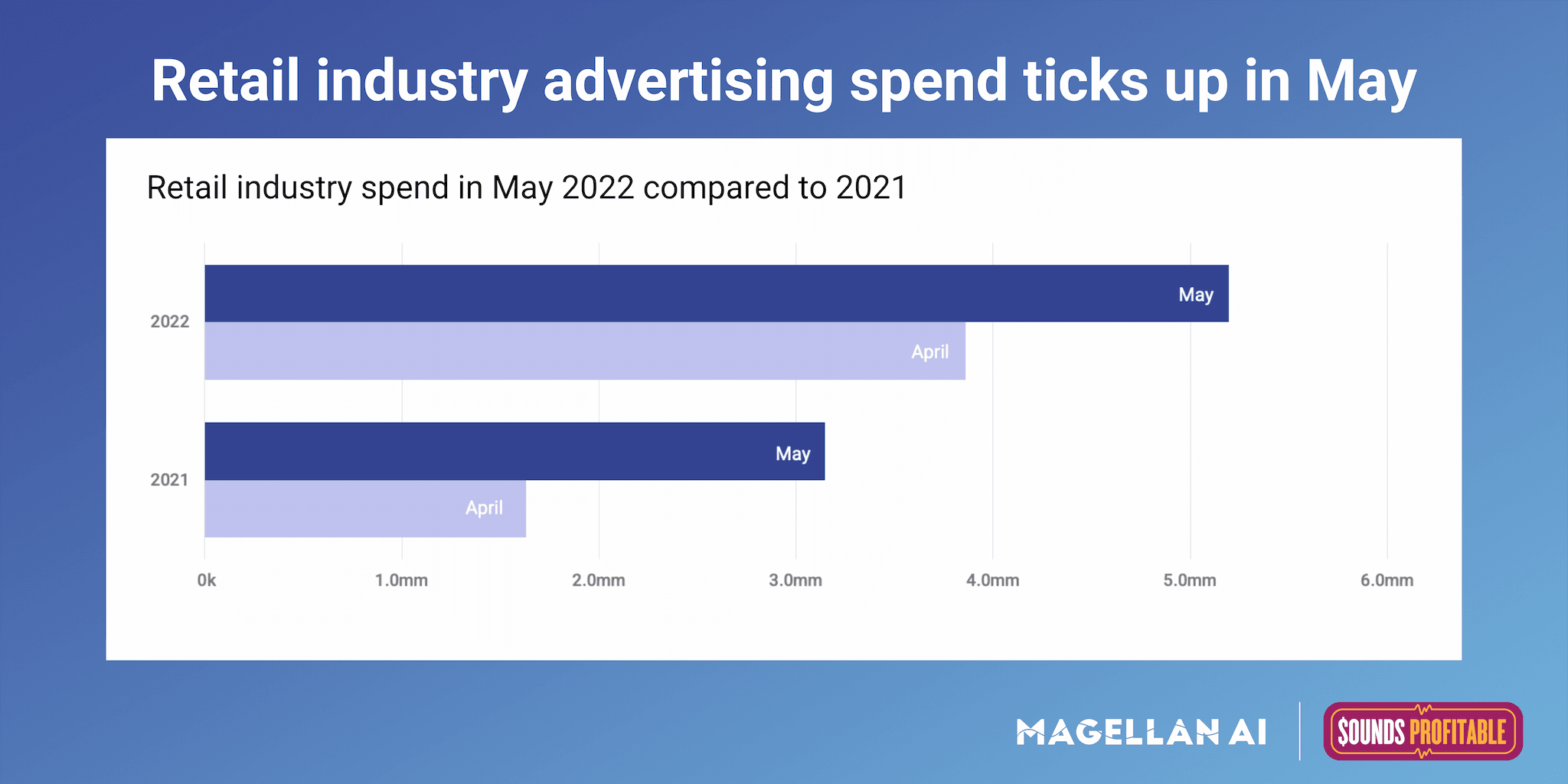 This is a great example of a seasonal industry-wide trend that we are able to see in the data. For the last two years the retail industry has increased spend by over $1mm from April to May. Looking forward we can expect spend to peak in June, then begin to decrease in July before picking back up for the start of the holiday season.

Every month we highlight similar industry-wide trends in our monthly market update. For more insights like this and much more. Sign up to join the May 15-minute monthly update on June 28th.

Where we caught the ad: Mind Pump: Raw Fitness Truth

Who else has sponsored this podcast? Paleo Valley, Seed, Zbiotics, Magic Spoon

Where else has this brand appeared? Optimal Protein Podcast (Fast Keto), Dadville, Weighing In, Satellite Sisters

Why it works: This episode of Mind Pump specifically focuses on ‘the ideal protein intake’ and what better way to get your protein in than with meat—specifically meat from ButcherBox. The hosts of this podcast mentions the sponsor—ButcherBox—during the pre-roll and then focuses more in-depth on the brand later in the episode. The hosts even share that they will be eating products from ButcherBox later that day - and it won’t be the first time.