I’m as excited as anyone that podcast advertising is finally a billion-dollar business in the US. But I’m also a realist, and I know that as we grow, it’s important we embrace the standards that ad buyers have come to expect with other forms of advertising. Making an industry-wide commitment to third-party verification is a good start. Here’s why.

This week on Sounds Profitable: Adtech Applied, Bryan is joined by Pierre Bouvard from Cumulus Media. They what the podcast industry can learn from radio about adtech. Will podcast ads go the way of radio? Find out!

Podcast advertising is incredibly linear. Where other forms of digital advertising involve multiple calls to multiple pieces of technology from different stages in the ad serving flow, everything in podcast advertising happens serverside. Because of that, we haven’t really been asked to validate any aspect of our ad delivery flow other than an insistence on IAB certification.

In nearly all of digital advertising, third-party verification is a non-negotiable part of the equation. Most of my early career was spent in the mobile advertising space, trying to troubleshoot why verification tags were only reporting 80% of the impressions our internal tools were reporting. Why? Because in those spaces, ad buyers only pay for what their third-party verification tool of choice says the total impressions are, and nobody is up for taking a 20% cut on revenue.

Third-party verification in podcasting is accomplished by the hosting platform server-side firing the tracking URL. But in the rest of digital advertising, that tracking URL is fired from the users device. And all the other third-party verification solutions rely almost exclusively on that same mindset: loading something directly on the users device. Something we cannot do in podcasting.

But we have a real opportunity to provide ad delivery verification to buyers in our space. We just need to approach it from a different perspective.

It Starts With Airchecks

I firmly believe that airchecks are at the core of all verification in podcast advertising.

If you’re not familiar with an aircheck, its a clip of an episode that proves the ad ran as contracted. Most of the time they include 15-30s of content on either side of the ad to identify where in the episode the ad ran.

But how are these airchecks generated? And does it scale?

Surprisingly, most hosting platforms don’t provide a way to easily create an aircheck, which is wild considering that on every single download request, they have to build a new file or select a cached existing file to be sent down to the listener. So the hosting platform absolutely knows where the ads are if they’re served through the platform’s DAI tool. Or for baked-in ads, the episode can be easily transcribed to identify the ad placement.

But advertisers aren’t at the mercy of podcast hosting providers. There are four third-party platforms that focus heavily on providing airchecks for ad buyers and publishers: Magellan AI, ThoughtLeaders, Veritone, Sonnant, and Podscribe (check out the product deepdives with Podscribe and ThoughtLeaders covering their tools). Each of these companies operates similarly: They download episodes multiple times, from multiple locations, and transcribe them to find all the ads available in the episodes. This makes it incredibly easy for these platforms to automatically create airchecks, proving that the ads did run for their clients.

But that’s just the start of providing a comprehensive verification standard in podcasting. A standard that we all should be prioritizing as a way to legitimize our industry.

If You Know, You Know

It’s a non-trivial amount of work to download enough episodes of a show to make sure you get the ad you’re looking for, especially if it’s served through dynamic ad insertion. But these partners manage to pull it off. So, outside of providing their clients with the proof that the ad actually ran, let’s cover what else we can learn from this style of verification.

A single podcast episode can easily deliver baked-in, dynamically inserted, and programmatic ads. That means three different systems trying to figure out what ads should and should not run individually and then working in tandem to not step on each others’ toes. By transcribing the episode, it’s straightforward to see every ad in an episode and confirm whether or not the ads ran properly, as well as if competitive separation was violated. (Competitive separation deserves its own article in the future, but for now, just know that unless all ads are managed through one flow, it’s not unlikely to see competitive ads running in the same episode.)

How many ad breaks should be in a podcast episode and how many ads should run in a single break is something we as an industry need to standardize (covered here with Pierre Bouvard of Cumulus Media on our podcast). Unfortunately, there isn’t a standard today, but tools like this would enable a buyer to see exactly where their ad is placed within an ad break and within the episode itself.

While it would be unscrupulous for an ad to be flighted more than once in an episode without the ad buyer’s express permission, tech glitches happen. A robust verification system can easily catch those instances when it does happen so that make goods can be issued and delivery settings can be adjusted. And depending on technical execution, the downloading tool could easily appear as the same device making multiple requests, to confirm that campaign frequency capping is being honored.

While publishers can and often do provide ad buyers with the ad recording or an aircheck, these platforms provide the added luxury of being able to confirm whether or not the specific talking points, promo codes, or vanity URLs were correctly used. Further, they’re able to see the frequency at which the creative is refreshed.

What Do We Gain

Third-party validation of ad buying is all about providing buyers with the confidence that what they paid for was actually executed. Each deal absolutely can be unique to an extent, and each publisher can operate in a different fashion. But we need to make it possible not only to vet the success of a campaign (which we do a great job with through attribution tracking and surveys), but to vet that what the ad buyer purchased was truly executed on.

I believe that every ad buyer should be using a third-party solutions like Magellan AI, ThoughtLeaders, Veritone, or Podscribe to build a process that works for them for validating their buys across all of the podcast space. Just like I believe that we’re at a point that we should be using third party tracking through partners like Claritas, Artsai, LeadsRx, Loopme, and others, just to enable buyers to see their delivery in real-time in their own account, even if they’re not focused on attribution.

We’ve gotten incredibly far with Download and Ad Delivered as our core metrics. We’ve added to those by third-party verifying our hosting platforms or running attribution and surveys. But what we need is another solution that can be applied across all campaigns, regardless of execution type, that provides confidence and is ultimately indisputable.

And nothing in podcasting is more undisputable than a timestamped episode downloaded directly from a hosting platform.

Arielle Nissenblatt of EarBuds Podcast Collective this week has chosen Home. Made. from Rocket Mortgage, hosted by Simplecast and measured by Chartable and Podsights.

What I love about this show is that I had no idea (until it was explicitly stated) that this show is branded by Rocket Mortgage. Home. Made shares stories about how people relate to the concept of home. I particularly enjoyed episode two, The Man and the Mountain, which shared the story of Harry R. Truman, who refused to evacuate his home, which was in the vicinity of Mt. St. Helens, during an eruption. This show introduces a whole new sound to branded podcasts for me. 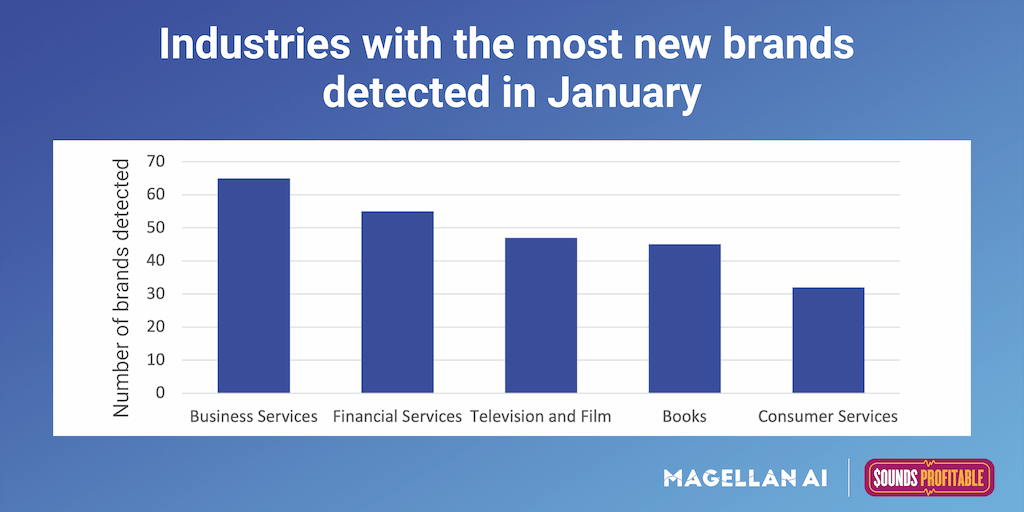 While Q1 is a notoriously slow time for advertising, January and February (so far) have brought in over 1100 new brands. In January, most of those brands were in the Business Services and Software industry including Chorus·ai, Axonius, and Influence & Co.

Curious about which brands are increasing their investment each month? Join the 15-minute monthly update on March 17th.

This week’s Anatomy of an Ad breaks down a host read ad for Care/Of presented by Colleen and Ashlie, hosts of the podcast You Can Sip With Us.

Libsyn bought Podcast Ad Reps, adding its 120 show roster to AdvertiseCast. It also launched a free podcast platform, Libsyn Studio … Will Ferrell was confirmed as a speaker at Podcast Movement … A new podcast app for fiction podcasts, Apollo, launched in beta … and Spooler launched: a new podcast platform that uses DAI to update news podcasts to keep them up to date … For news, jobs and events every day, subscribe to Podnews.