Are Programmatic Ads Bad For Podcasting?

Are programmatic ads bad for podcasting? Or are they a lifeline for creators? We ask the number one solo artist in U.S. history.

My partner, Bryan, has been talking about programmatic advertising this summer, and I wanted to add a thought about this from the perspective of the audience, that many-limbed beast I’ve made a career out of studying. To do this, I will enlist the help of Garth Brooks, who I opened for once in Nashville (name dropper).

In a previous life, I worked on a lot of research in and around the music industry, including a big annual research presentation to a gathering of Country Music radio and recording industry executives in Nashville. My presentation was a main stage keynote that was immediately followed by “A Conversation With Garth Brooks.” (Yes, I got a selfie, because I know he was thrilled to have a memory with the top-selling research artist of all time.) Garth didn’t have his guitar; instead, he was there to spill the tea on the Country music industry, and how streaming had changed the landscape and the expectations of listeners.

One thing he said really stuck with me: he maintained that streaming music services had ended a lot of songwriter careers before they could even get started. In the days of “albums” (which, for our younger readers, were collections of songs that you had to buy in order to get the one you wanted in the first place), a new or struggling songwriter might get the odd album track on a Randy Travis album, or a deep cut on a Reba record. It wouldn’t net them “F-U” money, but it would be enough to stop waiting tables for a few months and keep writing, which eventually led to them getting better, and maybe landing a single or a number one hit, which could set them up for a career. The album cuts that streaming effectively killed unless your name is Ed or Taylor were the lifeline that kept the struggling artists going just long enough to master their craft and stay in the game long enough to start writing hits.

iTunes killed that, at least in Country, which has a long tradition of songwriters who aren’t otherwise popular artists. With consumers able to purchase just the single track they wanted, the farm system for songwriters began to dry up, the lifelines pulled. Today, even in pop music, we have a dwindling number of “hitmakers” like Jack Antonoff and Finneas O’Connell, who have mastered the art of crafting singles geared for the Spotify set. And with how streaming has changed music consumption, it’s hard to break the Top 20 on Spotify when Ed Sheeran has 16 of them.

Here’s how this all ties back to programmatic advertising. For some podcasters, programmatic is the devil, an unwelcome intrusion into an otherwise pristine space. But programmatic advertising, with its efficient marketplace of buyers and sellers, is also the lifeline that could keep independent podcasters in the game while they work on their craft and build towards a “hit” of their own. Let’s face it: direct support from subscribers and patrons can only carry the developing podcaster so far, and if you don’t have enough of an audience to quit your day job, you don’t exactly have the bandwidth to go out and pitch P&G to advertise on your D&D podcast. Opting into a programmatic marketplace might be enough to keep you in the game another week, another month, another year. It might be the bridge to successful monetization with host-read ads alone. And programmatic is also the key to fully monetizing the incredible long tail of podcasting, distributing podcast dollars as widely as the audience is distributed, instead of clumped together with the top shows, because those shows are just easier to buy.

And that’s really the key with programmatic--it makes your show easy to buy. Most advertisers don’t want hard-to-buy ads, no matter how they convert. I remember sitting in the audience at a radio conference once, listening to an audible gasp from the executives in the audience when a pair of high-level political operatives told them that they didn’t buy a lot of radio for their candidates, because radio was too hard to buy. WHAT ARE YOU TALKING ABOUT, screamed a room full of radio salespeople. But the politicos were right—if they are working for a candidate for Michigan’s gubernatorial race, they don’t want to buy market-to-market, they want to buy Michigan. This is still not easy with radio, and something the streaming services eat radio’s lunch on.

“OK,” you might say. “But programmatic is still The Devil.” Admittedly, it can sometimes manifest as evil. We have all been jolted out of our host-induced reverie by a clumsy, too-loud ad dynamically inserted into our otherwise halcyon environment, like pineapple slices on a pizza. Abomination! But let’s be honest--this isn’t the fault of programmatic advertising. It’s the fault of some dude named Brandon or Kyle or something, who pushed a button and said “that’s probably good enough.” The problem isn’t programmatic. It’s you, Kyle. Do your DAMN JORB KYLE.

What is really holding back programmatic from becoming the lifeline for so many up-and-coming podcasters isn’t quality, or the disruption of podcasting’s intimate environment we hear so much about. It’s assumptions, assertions, and otherwise unproven bits of received wisdom. I’ll close with an incredibly efficient tweet from noted developer Marco Arment (he of Overcast fame) that I am singling out not to quarrel with Marco specifically, but merely because this one tweet neatly encapsulated the three biggest assumptions about programmatic advertising that I think we as an industry need to poke at: 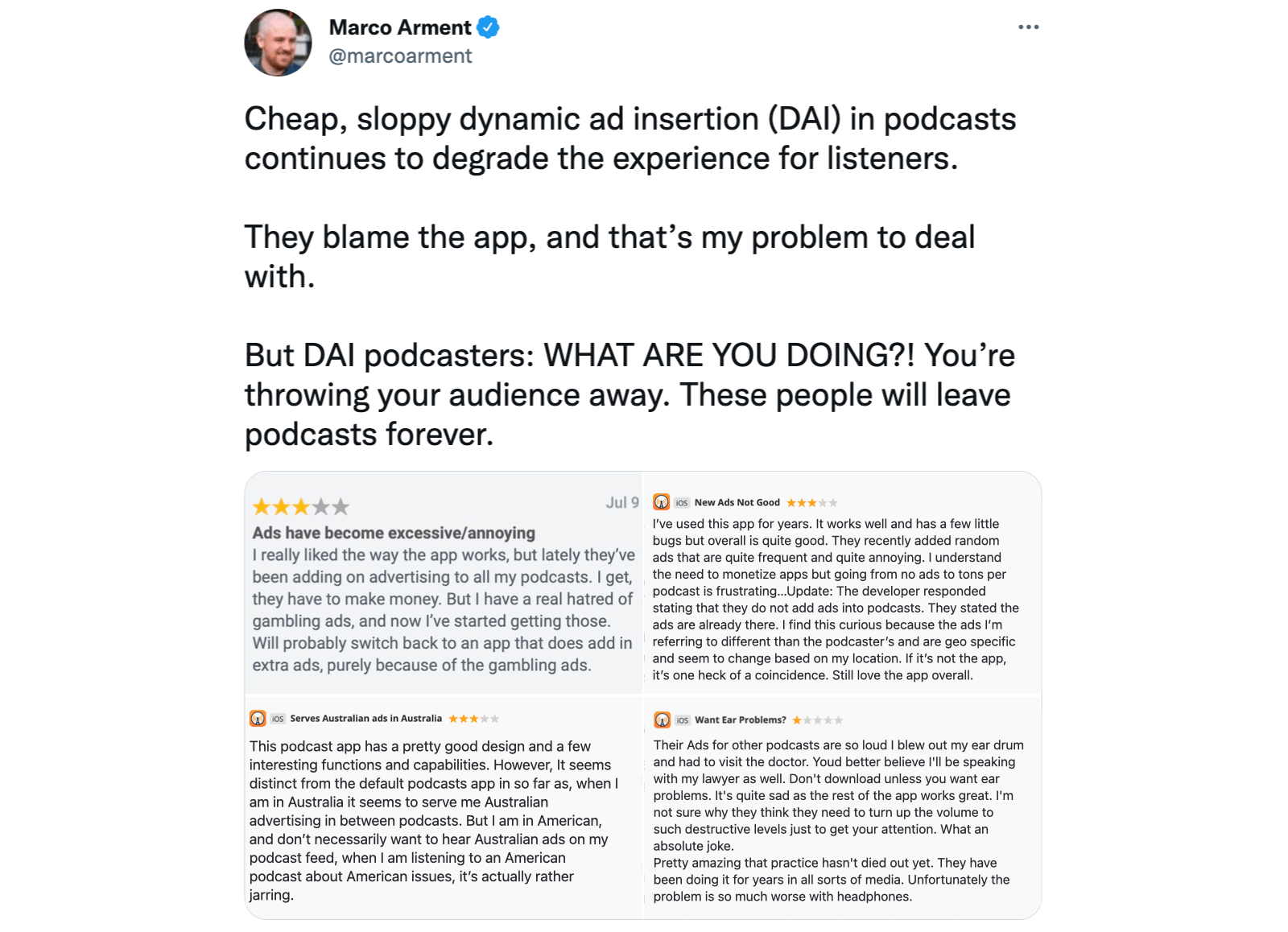 The assumptions, in order:

“They blame the app.” Taken literally, as a problem for app developers, this troubles me not. But let’s expand this to an assertion I suspect Marco would agree with: that listeners will blame the podcaster, and there are some negative reviews posted as proof. In my business, we have a saying (well, I say it, anyway): Data is not the plural of anecdote. Yes, a few bad reviews or tweets can be unsettling. After all, a bad tweet likely represents 10 people who share the same opinion. But if one bad tweet = 10, one good tweet very likely = 1000. People aren’t as motivated to praise as complain. And anyway, a couple of bad tweets are like shark sightings—get two in the same place in one summer and all of a sudden that place is SHARK BEACH.

“You’re throwing your audience away.” There is no evidence of this beyond the anecdotal. I am a fan of YouTuber Rick Beato’s music-related content, which is punctuated every five minutes by one or two terrible ads about things I don’t want. I don’t take it out on Rick Beato. I love his content. If your audience leaves you because of a bad ad on your podcast, maybe you should turn your microscope around and examine how compelling your content is. An ad is a part of the “attention bargain” that all consumers are accustomed to making. If a listener leaves your podcast because of an ad, it doesn’t mean the ad was the problem. It means your content wasn’t worth the bargain. That’s real talk, friends.

“These people will leave podcasts forever.” If Slap Chop and Ron Popeil haven’t scared us away from television, I don’t think GEICO is going to chase people off of podcasts. There’s little evidence that this happens in any form of media, let alone in podcasting. The possible exception here is that excessive advertising has certainly had an impact on terrestrial radio listening, but a) commercial radio spotloads are WAY out of control, and b) most Americans still listen to radio every week.

But here is the real reason why so many of these assumptions we make about programmatic advertising compared to host-read ads are likely overstated—it isn’t that programmatic ads aren’t so bad, it’s that to the listener, an ad is an ad. They aren’t there for the ads, period, no matter how they are delivered or produced. For multiple years now, the Super Listeners study from Edison Research and our sponsor Ad Results Media has shown something similar to this: 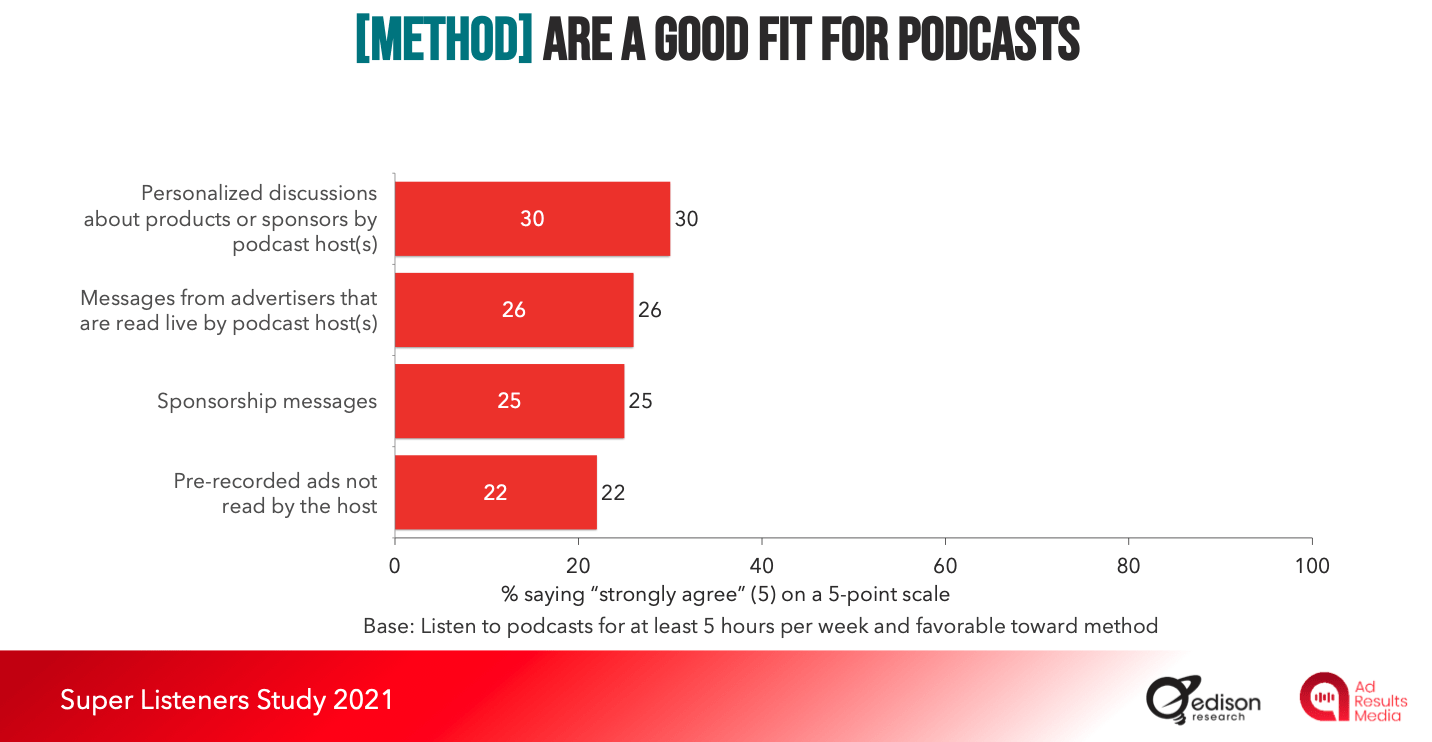 Are host-read ads “better” than pre-produced announcer read ads? Probably. Are they a lot better? Not as much as you think—and not because they are somehow lacking. No, it’s because screaming insurance ads and lovingly-read host mentions have this in common—they aren’t the things listeners came to the show to hear.

The onus, then, falls upon the creative execution of the advertisement, not the form of delivery. And it is here, my friends, where Sounds Profitable wants to shine a little light. On August 23rd, at Podcast Movement in Dallas, we are holding the first Sounds Profitable Business Summit. One of the highlights of this one-day event will be the debut of our next research study, hot on the heels of our very successful study, The Creators. This project will present a definitive analysis of the structural differences of host-read, live read, and announcer-read ads from the standpoint of both listener appeal AND brand measures. While attendance at the summit is limited to Podcast Movement ticket holders who represent the nearly 100 companies sponsoring Sounds Profitable, the data will be live streamed and publicly available to all.

In our quest to help the podcast industry grow, and do better, we are going to continue to do the work that supports an industry—one in which independent creators and networks alike can survive and thrive. Programmatic advertising isn’t a necessary evil—it’s the key to monetizing the long tail, keeping independents in the game a little bit longer, and giving us all the runway to chase that number one single.

Maybe Garth will cover it. 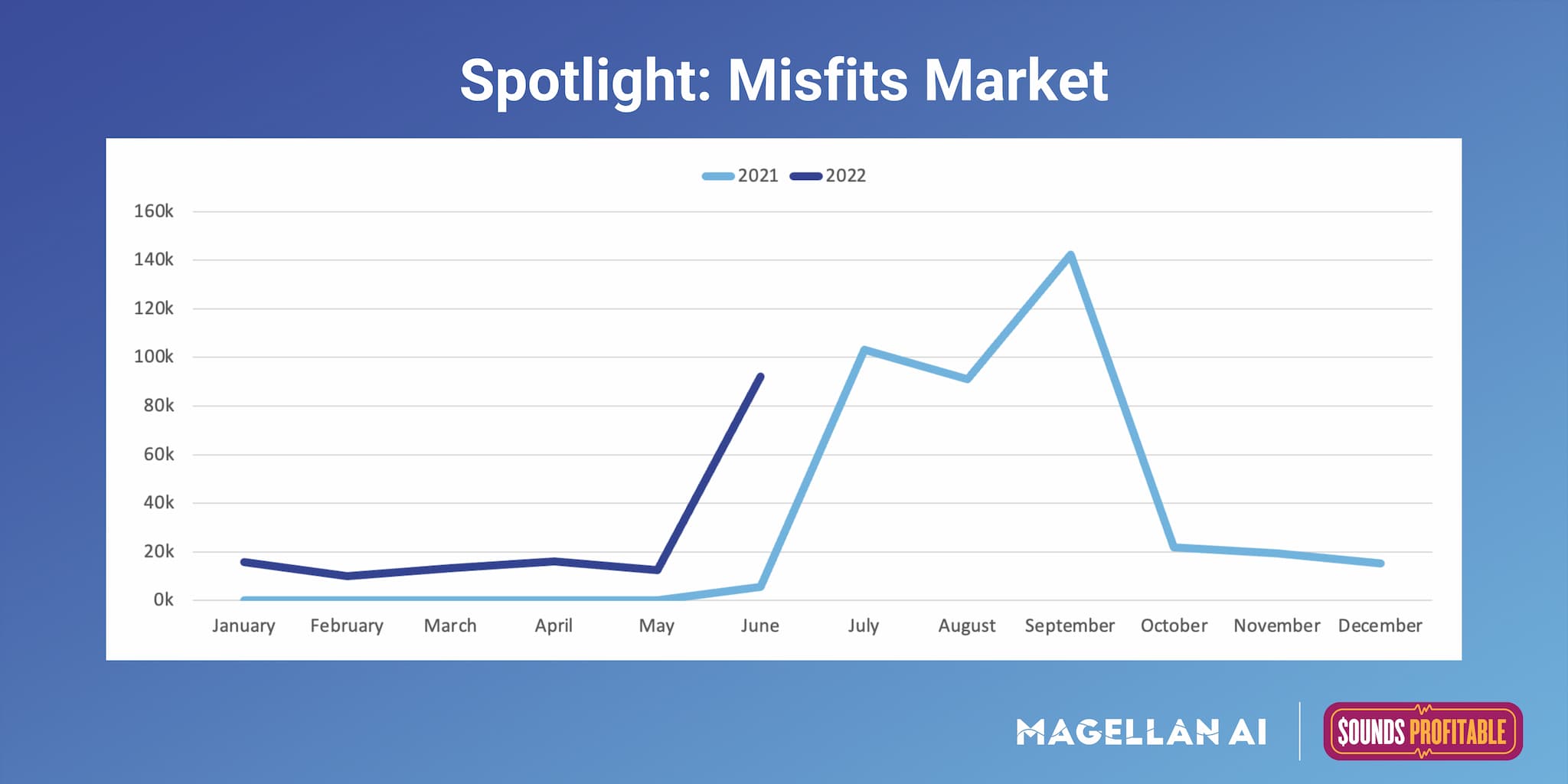 This week we are spotlighting Misfits Market, which first started advertising on podcasts in June 2021. Misfits Market is an online grocer that offers discounted, organic and sustainably sourced groceries.

Where we caught the ad: Pod Save America

Who else has sponsored this podcast? Magic Spoon, BetterHelp, Helix Sleep, Noom, Squarespace

Where else has this brand appeared? Real Life Real Crime, The Adam and Dr. Drew Show, Adam Carolla Show, Whiskey Ginger with Andrew Santino, and many more.

Why it works: Those who listen to Pod Save America want the nitty gritty news and politics as it is - no b**t—and that’s exactly how the podcast hosts delivered this SimpliSafe ad. They connected it to current events, “no matter what crazy things are going on in the world, homes should feel like the safest place on Earth,” gave a concise explanation of the service, and then finished it off with a little bit of humor (Pod Save America humor that is).

Podnews is free in your email inbox every day.