I Hear Things About The Future Of Audio

Making podcasting better. That’s a pretty common refrain here in the virtual halls of Sounds Profitable. And today, we’re excited to announce our next commitment to that goal via an exciting addition to our team and offerings.

Ma’ayan Plaut is the growth marketing manager at 3play media and is passionate about the need for podcasters to create accessible and compliant podcast transcripts. We’re moving towards a world in which we don’t simply consume podcasts by listening, making this conversation extremely important. Listen in!

A couple of weeks ago, I announced that I would be leaving Edison Research this month to double down on digital audio, and podcasting in particular. Well, here comes the doubling. On June 1st, I am joining Sounds Profitable as Partner, teaming up with Bryan Barletta to help build something to make the podcasting space better for everyone. As a part of that, I Hear Things and its companion podcast will then be under the umbrella of Sounds Profitable, where I’ll be a regular contributor.

But this is about a lot more than a newsletter.

I started my media research career [REDACTED] years ago, primarily in the radio industry. I’ve had the privilege of providing insights for some of the biggest stations in the world, from Z-100 in New York to J-Wave in Tokyo, and I’ve done audience research for some of the best talent in audio—Howard Stern, Elvis Duran, Bob & Tom, even RuPaul. In 2004, I listened to my first podcast. I am pretty sure it was Todd Cochrane's Geek News Central. Was Todd Cochrane the next Elvis Duran? Um… no (sorry, Todd.) But could I hear that content anywhere on the radio in America? Nope. I was hooked. This was what I wanted to do when I grew up.

Early on, it was the content that attracted me personally to the space, but my business brain was more intrigued by the behavior that RSS audio enclosures facilitated: the ability to listen to whatever you wanted, whenever and wherever you wanted. I mean, why wouldn’t that be huge? It wasn’t rocket surgery, to quote my friend Chris Brogan. I wanted to work in this nascent industry—but there wasn’t really an “industry.” So I set out, in my own humble way, to play a small role in building one.

Today, over a hundred million Americans listen to a podcast every month, and you know that because Edison Research has measured the space reliably for sixteen years—and will continue to do so. Edison has similarly measured the space in Canada, Australia, Germany, the UK, and South Africa. With credible measurement comes the stability upon which the foundations of an industry can be built, and I am incredibly proud of my role in that.

So, we’ve got an industry. Now what?

Well, now we compete. In the early days of an industry, people often compete based on information arbitrage—when buyers and sellers have incomplete information. The latter used to be true in car sales, and nobody liked buying a car in that era. If you did, I would like to interest you in an extended warranty for this article, in case it breaks on you after the manufacturer’s warranty has expired. Podcasting has had its fair share of this. It’s time for us to do better.

Bryan and I don’t just want to write a newsletter. We want to make podcasting better. Those aren’t empty words. Bryan proves it right here every week. He is exactly who you think he is—a tireless advocate for making the space better for everyone. To date, this space has done this through the lens of ad tech and monetization, but that’s just the first leg of this odyssey. With Bryan’s deep knowledge of the advertising and technology side of podcasting, and my years of expertise on the branding and audience development side of the space, we can do together what neither of us could do alone.

Ultimately, Bryan and I have a shared vision to improve podcasting by tirelessly advocating for transparency, access, inclusion, and fair play. We want podcasts to be measured accurately and consistently. We want the core fundamentals of the podcast business to be available to anyone who wants to learn them. We want creators and executives at the highest levels in podcasting to be as diverse as the incredible audience for podcasting. And we want podcasting companies and independents alike to be able to profit from their efforts in a fair marketplace.

Our mission is simple, but audacious: we want to set the course for the future of the audio business. (We thought about Destroy All Monsters, but that was taken and it never seems to work for long.) The new Sounds Profitable is going to be founded on four basic pillars:

We are already getting started on all four of these efforts—indeed, if you are already a Sounds Profitable sponsor, Bryan has probably already reached out to you about one or more of them. A Sounds Profitable sponsorship, by the way, is the entry ticket to all of these offerings—I was a sponsor before I was a partner—and your best means to gain priority access to our research and event opportunities, as well as to lock in consulting time. We were thinking about maybe making that an NFT, but a) we couldn’t decide on a cute animal, and b) I want to live with myself, so let’s just roll with a sponsorship.

I hope you’ll forgive a couple of paragraphs of plugging there—Bryan and I have always been and will continue to be focused on providing as much freely-available information and insight as we can in service of leveling up this space and the companies that serve it. We want the same things—to create a playground that supports as many ambitions in the space as possible, just as it has given us a wonderful career. We are going to get there by making the playing field bigger, the players more diverse, and the game as fair as it can be. We will advocate for you—and I hope, in turn, that you will support us.

Arielle Nissenblatt of EarBuds Podcast Collective this week has chosen Tiffany Dover Is Dead* from NBC News, hosted by Simplecast.

First of all, I’m a sucker for gorgeous cover art and this one immediately drew me in. Next, this show is beautifully paced and gripping all throughout. The host, Brandy Zadrozny, lets listeners into the world of her reporting mission. This podcast focuses in on the conspiracy that Tiffany Dover, a hospital nurse based in Tennessee, died in December of 2020 after receiving her first Covid vaccination jab. Zadrozny is on a mission to prove that Dover is in fact, not dead, which turns out to be harder than you’d think. 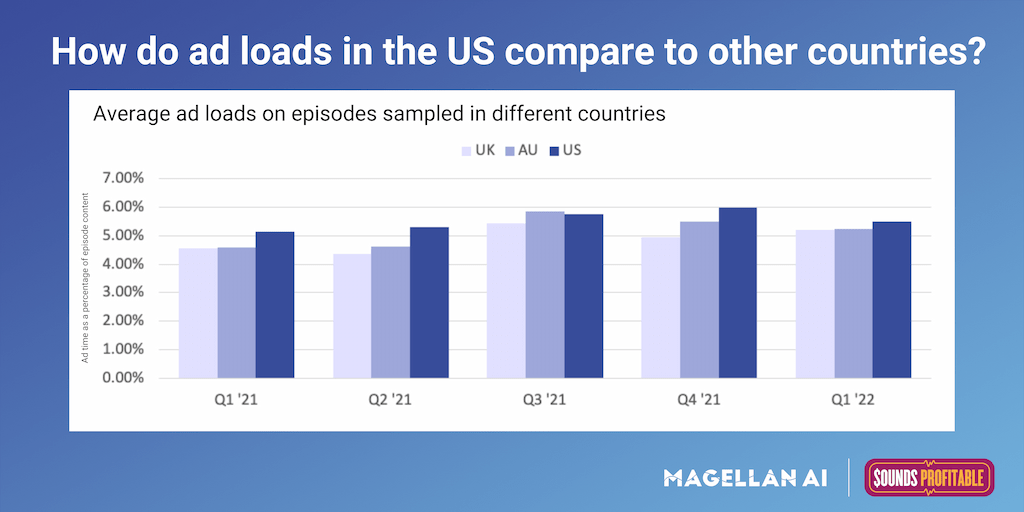 Did you know Magellan AI also tracks podcasts outside of the US? In fact we track podcasts in Canada, Germany, Australia, and UK. This week we compared the average ad load on podcasts in the US to Australia and UK.

This week’s Anatomy of an Ad breaks down a host-read for Noom presented by Jon Lovett, host of the podcast Lovett or Leave It.