It’s a myth that podcasting doesn’t have the analytics advertisers want. But that doesn’t mean the analytics we have can’t be improved upon. A recent “bug” from Apple Podcasts showed us how it can be made better. But is our industry ready for the fix?

Omer Jilani, VP of Sales at Claritas joins me on the podcast to talk about alternative attribution. We’re running a podcast listener study with Edison Research, so please listen to an episode and fill out the survey!

At the end of May 2021, a new version of Apple Podcasts started displaying a bug: all the podcasts that listeners had set to auto-download… stopped auto-downloading. The issue was so impactful to the podcast industry that Apple, who aren’t known for making a lot of statements about podcast issues, actually issued a notice about it (about a month later).

The good news is that visually, nothing changed on the listener’s end. The app still showed the expected episodes, and still played them when the listener hit the play button. It just stopped automatically downloading them. And because Apple Podcasts is a native app built directly into the OS, it can only be updated at the OS-level rather than an app-only update. So that bug lasted just under two months, and because it takes about a month for most iOS users to update their phones, it’s still impacting podcast publishers even now

How big was the impact, remembering again that followed podcasts were all still updating, just not automatically downloading episodes at time of release?

Apple has since fixed the bug, much to the delight of publishers.

But I think Apple’s decision to fix their auto-download bug was a mistake.

Are you familiar with how the Apple Podcasts app works with auto-downloads?

When a listener follows a podcast, the app is set to automatically download episodes as the default behavior the moment the RSS feed indicates a new episode is available. Unless a listener goes into settings to stop this default behavior—and why would they—Apple Podcasts will continue downloading every new episode from that podcast until one of the two conditions are met:

Some other apps are even more enthusiastic. Overcast downloads every new episode from a podcast until your phone almost fills up - even if you don’t listen to a single one. And, if this blog from Simplecast a few years ago is right, so does Stitcher (though it’s had a rebuild since then).

Other apps, notably Google Podcasts and Spotify, default to only downloading a podcast when a listener wants to play it.

There are absolutely valid reasons to download (or even auto-download) podcasts: when on a plane or a subway train, for example, or if you’re on an expensive data plan. But is it right that auto-downloads is the default setting in 2021 for Apple Podcasts?

Honestly, no. And it’s damaging to the industry that these apps leave it as such.

If a listener presses play on an episode that was auto-downloaded, neither the publisher nor host have any idea that the action happened. The episode is already on the listener’s device and the download event shows up in the show’s stats from the time the episode was released, so there’s nothing else to report.

Let me state that more plainly: neither you nor your podcasting hosting company has any idea when (or if) a listener actually listens to an episode that was auto-downloaded by Apple Podcasts. Apple will of course counter this by stating that the data is in Apple Podcasts Connect. But that aggregated data, unavailable to anyone not directly logging into their platform, is utterly useless for anything more than vanity metrics.

So when a listener presses play on an undownloaded episode, like episodes in Spotify, Google Podcasts, Podcast Addict, Pocket Casts, or just about every other app not named Apple Podcasts or Overcast, the download request normally happens in real-time. Now you have a measurement showing listener intent.

There is absolutely no such thing as streaming in podcasting, but there is intent-based progressive downloading. If apps like Apple Podcasts and Overcast didn’t auto-download episodes, then the industry would know that every single download request was initiated by a listener manually pressing play.

Let me make that abundantly clear: if Apple chose to remove auto-downloads, they would single-handedly increase the legitimacy and accuracy of the only centrally agreed-upon metric in podcasting. It would be so monumental that it wouldn’t be out of line at all to change the oft-abused and confused term download to something less stigmatized like Listener Initiated Play.

But instead, they rolled it back.

Your CPM is Safe

At the end of last year, Juleyka Lantigua of LWC Studios wrote a piece for Nieman Labs titled “The download, podcasting’s metric king, gets dethroned”. In the article, she highlights a selling strategy based more effectively on listen data than downloads.

The truth is, I think we’re already there without the math.

Podcast advertising CPMs already have all the vagueness built into them. Sure, a new show or a new publisher with the right backing can represent themselves in a way that they can ask for top dollar CPM right off the bat, but if those campaigns aren’t performing as expected, advertisers won’t continue to pay those rates.

A campaign measuring attribution in any form (promo codes, pixel-based, or surveys) for a show where many of their total downloads are unlistened to, simply won’t perform. Nobody can hear the ad if they don’t listen to the episode, so none of those unlistened to automatic downloads can result in a listener converting for the advertiser’s objective. Because nobody listened to it, no brand is going to stick around paying that high price without getting high performance.

The current prices that established publishers are charging have all these variables baked in. They take into account unlistened downloads and listener drop-off of plays. The drop in numbers didn’t magically reveal anything brands and agencies should be renegotiating, they just highlighted the fact once again that the podcast players are not active participants in our industry and at best, we have to work around their actions.

Pull the Bandaid Off

When Spotify announced their Streaming Ad Insertion, the big marketing push they made was their ability to track the impression in real-time. Eyes lit up. Pushback dropped. But today, the lack of shows actively using this technology and the high price it commands haven’t made that solution accessible or mainstream.

While this offering is great and absolutely works, it’s such a small portion of the entire podcast advertising industry. If it were to become a framework, adopted by every podcast player, the industry would rocket past those IAB estimates, but the podcast players are heavily focused on their silos, because truthfully, it’s working for them. In fact, Spotify’s just announced it’s pulling more shows behind the app-exclusive wall.

But I have to wonder, after buying Megaphone and really doubling down on their Spotify Audience Network, which does focus on the standard podcast advertising model that utilizes downloads, does Spotify regret taking that anti-download stance?

While a Listener Initiated Play isn’t going to tell you if the listener actually listened to the midroll ad, it is going to tell you that the download only happened when a listener wanted to start listening to the episode. It closes the gap substantially between Spotify’s SAI and the current state of podcast advertising, DAI or baked-in. It removes substantial amounts of doubt for the primary negative that those outside the industry throw at podcasting as their reason for not spending in our channel yet.

So how about it, Apple Podcasts team? Can you propel the entire podcast industry forward, re-solidifying your position as a leader in this space, by ripping off one very painful bandaid to help the entire industry move forward?

Can we, as an industry, agree that auto-downloads should not be the default in any podcast app? And can we work with Apple, Overcast and others to ensure this happens? 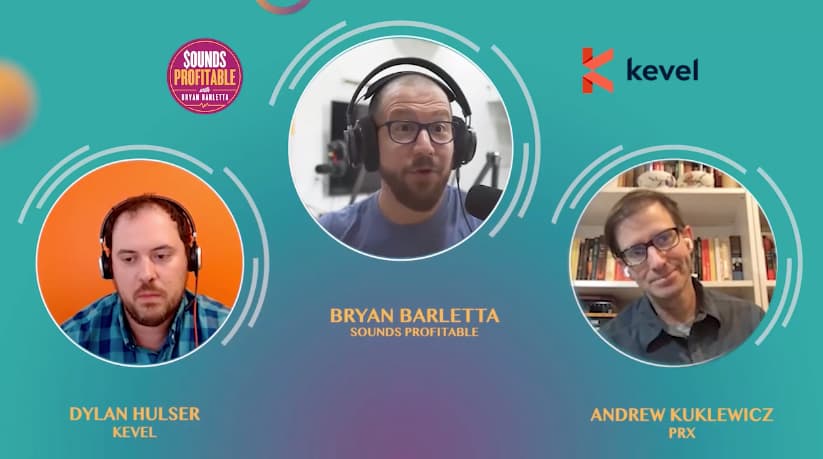 I’m a big advocate of buying vs building when it comes to podcast adtech, which is why I’m so happy to share Kevel with you. Kevel is an API based adserver that anyone can connect to their hosting in no time flat.

In our latest product deepdive recorded on Squadcast, Andrew Kuklewicz, CTO of PRX joins Dylan Hulser of Kevel and I to talk about the benefits of working with a third party ad server vs building it yourself. Consider PRX got Kevel up and running in under one week, we thought it would be the perfect presentation.

Arielle’s pick for this week is: Dad I’d Like to Friend

Here’s a recommendation in honor of one of the one and only Mr. Profitable, Bryan Barletta, dad of Theo and Bridger. Dad I’d Like to Friend is an easygoing, accessible show, aimed at parents who are looking for other parents to share in the stresses and successes of parenthood. As a non-parent, I appreciate Kevin Seldon’s insistence that the concepts of parenthood can apply to everyone. He makes good on this assertion by asking questions of his guests that don’t only ask them to call upon their experiences as parents. For example, “how do you spend your alone time?” Everyone, parents and non-parents, can contemplate this question.

We want to follow you (yes, you) on Twitter. Podcast adtech is very important to me, as I hope you can glean from this newsletter and our podcast. We love staying on top of everything in the adtech space. We find that one of the best ways to do that is on Twitter. So follow us at @SoundsProfNews and we’ll follow back.

More and more gamers are turning to podcasts as a way to connect more with their audiences and leverage their popularity even more (also a great way to add another monetization outlet). According to FaZe Clan Executive VP of Content, Bill McCullough, “We’re looking at podcasts as a great opportunity to expand formats and reach new platforms altogether. Obviously the audience is very loyal, and engagement is very high”.

What else is going on…

The IAB Podcast Upfront has announced its full agenda - it’s on Sep 9-10; Acast saw sales growth increase by 130% year on year, according to its latest financials for Q2 21; and Jean Taylor is the new CEO of American Public Media. You should subscribe to Podnews.

Our sponsors support a collaborative and educated podcasting space and are committed to raising up the whole industry together. Find out how you can become a sponsor today