What Does the Competitive Landscape for Podcasting Really Look Like?

There are around four million podcasts in the world today - but how many are you actually competing with? The answer is much smaller than you might think.

I am going to make a confession here. I haven’t read a business book in a while. I read, sure. Mostly fiction. But it’s been a while since I read a book on business or marketing, even though I get sent a lot of them.

I have to be honest--I don’t read a lot of business books because there aren’t a lot of great business books. So many are written and published quickly, meant to satiate some immediate need in the marketplace, but not built to last. There are millions and millions of new books published every year, many of them related to marketing, but look, if they aren’t going to be as good as the new Stephen King, well…it’s going to take a lot to bump that off my nightstand.

As someone who has also published a book hardly anyone read, I am giving you the voice of experience here. One thing that became very clear to me after writing that book was that I was going to be responsible for every single sale of that book. The publisher wasn’t going to help, and I wasn’t going to be on a display at Barnes & Noble or at the Airport Hudsons (unless I paid for that out of pocket.) No, any book I sold was going to be the process of retail politics--one speaking engagement or personal meeting at a time.

I wasn’t competing against the thousands of other business books that came out that month. They were irrelevant. I was competing against my own obscurity. The number of books “competing” against mine was an unimportant number. The only numbers that mattered were how many Twitter followers I had, how many emails were on my mailing list, and how many people saw my last talk.

There are millions of “published works” out there, but the overwhelming majority of them are completely unknown, save to the families of the authors. The problem isn’t that no one can find my particular book in a sea of search results. The problem is that no one is even looking. When you look at the marketing challenge in this way, it doesn’t matter if there are 10 new books in your space this year or 10 million. You are running your own race, and your competitors aren’t other books.

I think this is also a healthy way for podcasters to look at the challenges inherent in the current landscape for audio. Currently, there are nearly four million podcasts, according to Podcastindex.org. That can seem like a daunting number. But as Steve Goldstein and James Cridland have pointed out, the number of “active” podcasts is actually much, much smaller than that.

James and Steve have done the industry a solid service by computing an estimate of the number of active podcasts. My humble contribution is to propose a slight nomenclature change for that effort. Let’s call it, instead, “Podcasts in Active Production.” This makes sense, because it focuses the measure on the actual production of podcasts, which is the only thing counting the recency of episode releases can actually estimate. The truth about your competition is actually very different to this measure. This might scare you, but bear with me here.

I don’t know about you, but I watch a lot of shows that aren’t in “active production.” Last week while my wife was out of town, I power-rewatched Season One of True Detective. We are finally getting around to finishing Westworld together. Soon--a rewatch of Justified, the Great American Epic.

These are all “active shows,” because people are actively watching them. The problem with conflating “in active production” with “active” is that, for one thing, it wipes a lot of fiction podcasts off the map, and a lot of short-run series, as well.

But many of those shows currently show up in any top ranker. Those podcasts, I am here to tell you, are active. In last week’s Sounds Profitable, Bryan Barletta and I went through a quarter’s worth of data for every episode released by the Top 50 podcasts, according to the most recent Edison Podcast Metrics. Some of those podcasts, like Reply All, Serial, and Dr. Death, didn’t even release a new episode that quarter. Yet there they were, annoyingly active.

So, did I make things worse, or better? In a way, I submit that focusing on audience, and not production, makes it a lot better, especially if you place an audience bar on the measure, and not a recency of publication bar.

So, let’s take off the map any show that is really only being listened to by the creator and their immediate circle. I am sorry to say, that’s a lot of shows. You aren’t competing with those shows, because your audience is never going to hear about them. One thing I can tell you from my time behind the scenes at Edison Podcast Metrics is that the fat head of podcasting is VERY fat, and the long tail is VERY skinny.

If you believe me, how would that change your approach to podcasting? I certainly have a hope here: that you market your show. I mean, really market your show. When was the last time you heard about a podcast from a source other than another podcast or another podcaster? Podcasting in general simply does not market itself in other media. I’ve seen this movie before--radio used to market itself on TV all the time, but today? Radio only markets itself on its own airwaves. You can see how that is working out.

Spending money marketing podcasts in other media could pay enormous dividends. I don’t want podcasting to relive all the mistakes radio has made over the last 20 years. Podcasting only has to believe in itself, and make the investment. You aren’t competing against 4 million shows. Or 150,000 shows. Or 10 shows. When was the last time you saw any kind of paid promotion for a podcast? That is your competition. And there isn’t a lot of it.

Don’t you feel better? I’m off to continue binging Midnight Burger and walk the dog.

Tune in to the newest episode of The Download, a 10 minute roundup of all the latest news relevant to the business of podcasting! All delivered to your digital door weekly on the Sounds Profitable feed.

Sounds Profitable exists thanks to the continued support of our amazing partners. Monthly consulting, free tickets to our quarterly events, partner-only webinars, and access to our 500+ person slack channel are all benefits of partnering Sounds Profitable.

Want to learn more about partnership? Hit reply or send us an email! 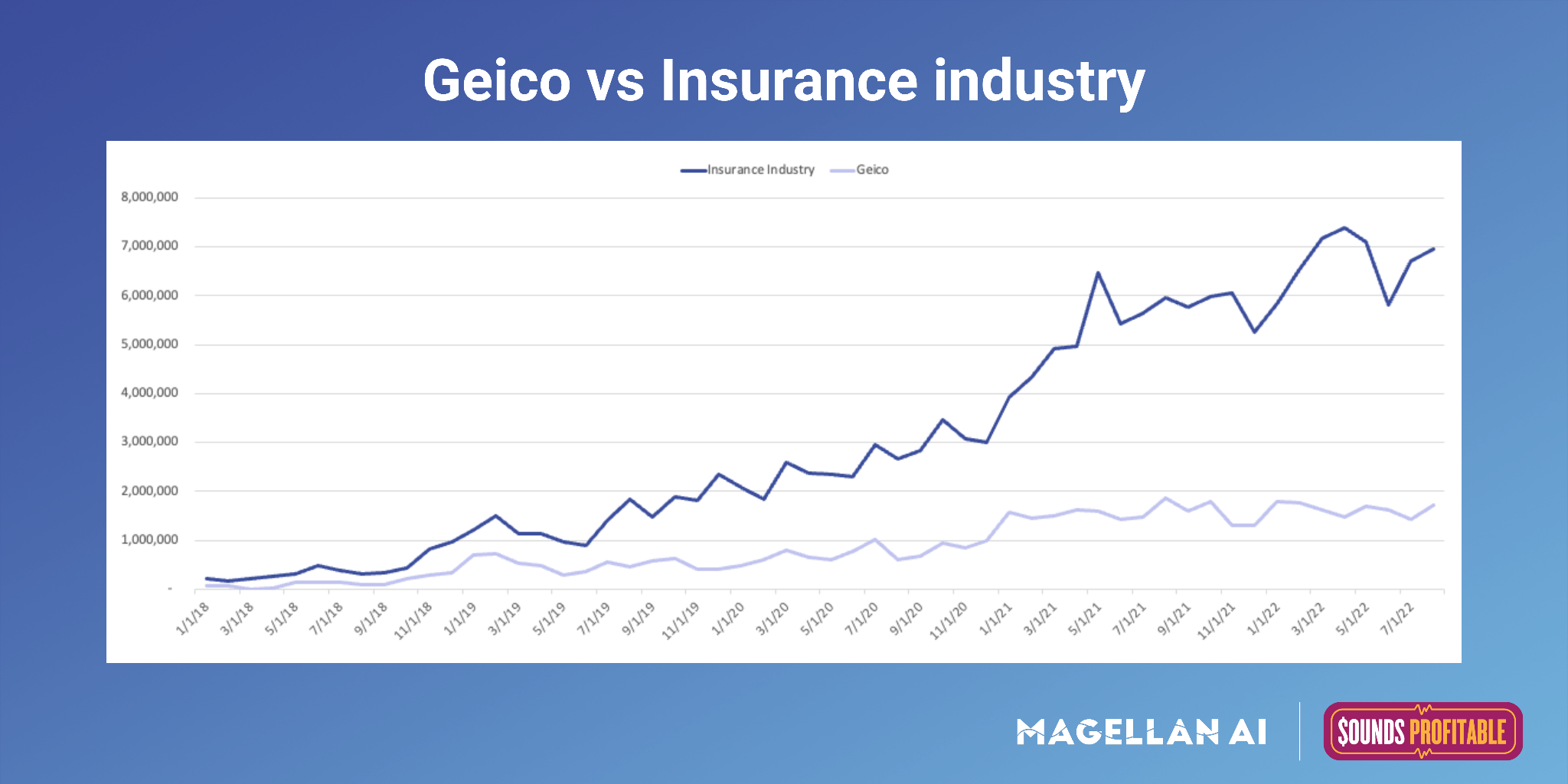 This week we are highlighting Geico and how its share of the insurance industry has changed over the years.

Where we caught the ad: Food Heals

Who else has sponsored this podcast? Organifi, True Leaf Market, Athletic Greens

Where else has this brand appeared? With Whit, Dear Gabby, Everything is the Best, The Ultimate Health Podcast

Why it works: The best integrations are ones where the service/product perfectly aligns with the podcast content. Food Heals brings together experts in the field of nutrition, health, and healing - meaning that listeners are open to nutrition secrets and products that promote inner healing. So, when the host promotes Just Thrive - a probiotic that helps restore your gut - listeners are bound to listen closely and there is the highest chance they will give the product a try. In this specific case, the host explains how Just Thrive’s product can help those suffering from celiac disease - those listeners will definitely relate and be interested in the trying Just Thrive (with the promo code of course).

This page contains automated links to Apple Podcasts. We may receive a commission for purchases made.