The Many Flavors of Dynamic Ad Insertion

Dynamic Ad Insertion has always been the core of podcast adtech, and in 2021 we saw an increase in adoption of it from hosting platforms, publishers, and advertisers. But DAI for podcasting was built without any form of centralized framework, meaning that each platform’s interpretation can be and often is different. Breaking down those differences is our first step towards building a universal framework.

This week on Sounds Profitable: Adtech Applied Bryan is joined by Claire Atkin, co-founder of Check My Ads, for a timely discussion on disinformation and accountability in publishing and in ad tech. Take a listen for practical tips on keeping your ads associated with brand-safe publications.

Dynamic Ad Insertion is an incredibly versatile piece of technology. From enabling publishers to fully replicate every aspect of baked-in advertising that they like in a more manageable way, to providing the most granular advertising opportunities we can offer, DAI is the core technology that enables programmatic advertising and differentiates between counting a download vs counting ad delivery.

But for something so critical to our space, we’ve done an incredibly poor job at defining what Dynamic Ad Insertion actually is and how it can be used.

Last year, I covered how DAI works (with a pretty cool interactive demo) and what value DAI brings for publishers and advertisers. But I skipped the pretty important step of explaining what Dynamic Ad Insertion is and what it isn’t. So today, with so many hosting platforms taking a shot at providing Dynamic Ad Insertion to their users, it’s probably a good idea to lay it out.

Because once we understand what DAI is (and what it isn’t), we can put it to better use and even improve it.

What is Dynamic Ad Insertion?

Dynamic Ad Insertion allows the podcast hosting platform’s adserver to decide, at the time of download request, what specific ads should be stitched into the podcast episode. All of this decisioning is based on the information provided by the device playing the podcast, such as IP address, device user agent, and what episode they’re requesting.

Where those ads are stitched into the episode is up to the producer of the episode. When the audio file is uploaded to the hosting platform, ad markers are placed at various points to indicate where ads can go. When a listener plays the episode, a series of decisioning happens in real time to figure out which ad units for the campaign are eligible to be added to the audio file. Each ad is its own file and once all decisioning is done, the hosting platform’s ad server stitches the core episode file together with all the ad files into one brand new file, which is then sent down to the listener’s device. All of that happens in the time between pressing play and hearing the first second of audio, since it’s not possible for the hosting platform to send that file until it’s fully built.

All decisioning needs to happen between when the listener presses play/download and when the complete audio file is sent to the device. That doesn’t mean a publisher needs to use Dynamic Ad Insertion like that, just that the option exists. This is a precursor for programmatic.

Publishers must be able to set markers for where ads can be inserted into an episode. Not only do these markers enable the ads to be added into the episode, but they enable the hosting platform to accurately identify the IAB standard of Ad Delivery, which is different than Download, and covers if the ad was sent to the listener’s device. This is a precursor for ad tracking and attribution.

AdOps must be able to affix a third-party tracking pixel to each ad, to be fired server-side by the adserver when Ad Delivery is counted. This is critical for advertisers to track if their campaigns have been delivered and to enable survey and attribution measurement.

Ads must be able to target attributes of the episode, listener, and time period. This allows for everything from mimicking baked-in ads to providing a different ad configuration based on every listener and when they downloaded the episode.

Before Dynamic Ad Insertion, if a publisher wanted an ad inserted into every episode currently released, the audio editor would need to take each episode and edit the file to include the new ad before re-uploading each file. This is a big reason why we default to baked-in ads being left in an episode forever: the effort and cost of a skilled individual to make that change is just too high.

Many publishers still sell their inventory in ways similar to how they sell baked-in. It’s about share of voice on one or more episodes for a set period of time, to drive benefit. And while dynamic ad insertion absolutely can offer that, many of those features might be overkill for the small to mid-tier sized publishers. Which is why last year we saw content insertion offerings from Buzzsprout, Transistor, and Captivate that offer what I call Host Enabled Insertion.

These tools enable something very similar to DAI. Insertion points in the episode still define what content should be inserted where. What’s different is when the decisioning for what ad goes where, does not happen at the time of download. Instead, these insertion points are configured per episode or for the entire show for a set period of time or a set share of voice.

I keep using the word content and not advertising in this description because I truly think this take on insertion can be used for so many things. Want to update the intro to every show in a catalog? Done. Going on tour and don’t want anyone to miss out? Boom.

It’s also a homerun for certain styles of ad sales that are common in Dynamic Ad Insertion. Publishers could easily sell ads in all new episodes, all back catalog, or their full catalog in these tools without any issue. The only things missing are listener-level targeting and programmatic advertising, both of which lend themselves to much larger publishers and networks overall. And most importantly, Host Enabled insertion provides the publisher with a way to actively monitor every ad they have live, the stats for those ads, and provide them with instant tools to remove them as needed.

But as cool as Host Enabled Insertion is, it’s still not as powerful or configurable as Dynamic Ad Insertion. Am I splitting hairs? Maybe. But it’s important to be precise when we speak of these options as to eliminate costly confusion. No one wants to pick the wrong tool for the job. Speaking of that…

Podcast adtech saw less direct growth last year but more adoption of the existing features of our space. But in that adoption, there was fragmentation. We’re using the same words to cover multiple different products, and even the products that align at their core don’t always offer the exact same feature set and capabilities. A great example of that is not all hosting platforms that support Dynamic Ad Insertion support VAST URLs or publisher-enabled programmatic adserving.

We’ve flourished as an industry with few standards and minimal involvement from “Big AdTech”, but at the same time that’s led to fragmentation, making it hard for publishers to move from platform to platform while still selling their inventory and for buyers to buy across multiple platforms and get the same offering. Heck, there’s still publishers out there counting downloads as ad impressions, creating discrepancy and confusion when third-party tracking gets involved.

Our options are pretty clear as we continue to grow: collaborate and build frameworks we can all get behind or feign surprise when major adtech players bring their methodology, technology, and ad spend to our space, enabling them to dictate a framework that we’ll all need to follow.

Arielle Nissenblatt of Earbuds Podcast Collective this week has chosen Sacred Scandal, hosted by Megaphone and measured by Podtrac and Chartable.

From iHeart’s My Cultura Network, this podcast centers on the murder of Sister Michelle Lewis. In 2001, Lewis was found dead of an apparent stabbing in her room, which was located on the grounds of a Byzantine Catholic School in Miami. Students and parents became aware of the crime and were justifiably rattled by it. For years, Paula Barros, who was a student at the school at the time, and Melanie Bartley, have been investigating this story. They’ve spent time with the alleged perpetrator of the murder, Mykhaylo Kofel, visiting him in prison. This podcast is incredibly well-told, laying out the details with precision and care. 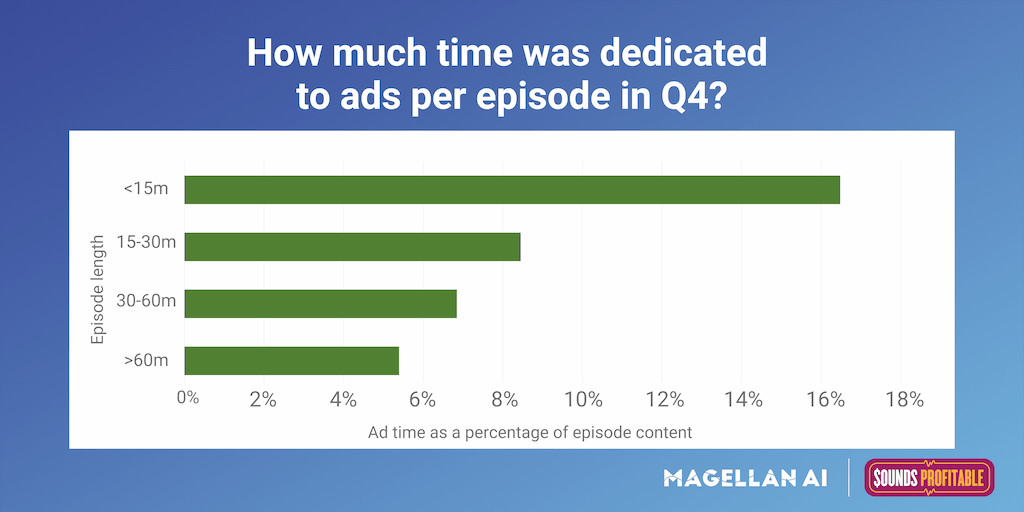 From Q1 to Q4 in 2021 the average ad load on podcasts increased by .84%. While there is variation in ad load by genre, 18 of the 19 most popular genres increased the amount of time dedicated to ads. The graph below displays how much time of an average episode is dedicated to ads and there’s still plenty of room to grow compared to other media -TV viewers are served ads on average 13.3 minutes (22%) per hour.

Join the webinar on February 10th to learn about how ad load changed over time and across genres.

This week’s Anatomy of an Ad breaks down a host-read ad for Helix Sleep presented by David Pakman, host of the podcast The David Pakman Show. .

The Spotify Joe Rogan saga continues, with new videos surfacing, and leaked memos from Daniel Ek. Research shows a large number of people want Spotify to take editorial control, but a (not quite as) large number don’t … Audiochuck has been accused of plagiarism, again - this time for similarities in their new podcast, The Deck, and one from March 2020 … ad revenue was significantly up for SiriusXM and for Spotify … and Google Podcasts seems to have switched one well-known podcast to a pirated version with ads on it. For news, jobs and events every day, subscribe to Podnews.