Claritas Transforms Multi-touch Measurement with the Release of its Attribution 3.0 Solution

One Key To Growing Podcasting We Take For Granted

We talk a lot about the unique content advantages in podcasting, but one key to growing the medium with an older audience might be even simpler.

Veritone has taken its award winning AI voice application, Veritone Voice to the next level with advanced features and customization options - resulting in even more lifelike and natural sounding voice. Join Bryan and Fisher Robison of Veritone in the latest Sounds Profitable Product Deepdive to learn more.

Bit of a “two-fer” today! This week, I’ve distilled some short thoughts about what I have learned in podcasting as I enter my 18th year in the space (and prepare for many more years to come, I trust). But first, a little contrary thinking about one of the main “disadvantages” of podcasting.

A number of years ago, I gave a keynote speech about the people podcasting had yet to convert: those who were familiar with it (or, at least with the term) who had not yet listened to a podcast. This potential audience gave a number of reasons for not trying the medium, including not having an app on their phone that allowed them to listen to podcasts (and for those of you who chuckle at this, I’ll remind you of all the Android users out there, and the connotations of the “pod” part of podcast). Some also indicated that they believed they had to pay for podcasts (the unfortunate term “subscribe,” which is finally starting to get rinsed out of the medium in favor of "follow”) or that they couldn’t find anything they were interested in.

But here was my favorite reason: that podcasting doesn’t give them anything they can’t get from other media, which in most cases means AM/FM radio. If, as they believed, podcasting was just “catch-up radio,” why bother, when they have an actual radio?

The common, and logical response to this would be to educate prospective listeners about all of the wonderful things that you can get through podcasts that you simply can’t get on the radio. In fact, public media aside, the average commercial radio station in America has devolved into a very limited set of commonly-available syndicated options: news, sports, conservative talk, and personal finance. Is this all there is? The podcaster says, nay!

I can tell you as a veteran of consumer insights, however, that it is deucedly hard to make people want a thing that they are unfamiliar with. This puts the would-be advocate for podcasting in an untenable position: guessing the exact type of content you could recommend to a non-listener that would flip the switch for them. Recommend something new and different, and you might not catch their fancy. Recommend the type of thing they are already listening to, and…well, why bother?

One of the things I like to do when confronted by a marketing challenge like this is to think about the circumstances under which a supposed disadvantage (“podcasting doesn’t give me anything new”) might actually be an advantage. This kind of flexible thinking sometimes leads to real breakthroughs in strategy and messaging. And, it turns out, there is indeed such a way to think about this “limitation” of podcasting in light of some dramatic shifts in how we listen to audio.

I spent the last seven years or so working with the Share of Ear data from Edison Research, and Sounds Profitable continues to be a client to that service, which remains the only single-source measure of all forms of audio in America. One of the most obvious trends in that data since the project’s inception in 2014 is the gradual decline of AM/FM Radio content as a percentage of our total audio listening. Some of that decline is certainly related to product. The commercial load of the modern AM/FM music station is simply non-competitive to the variety of ad-free or ad-light streaming music services available. But the product is not the sole reason for the decline. In fact, it might not even be the primary reason.

Share of Ear tracks the percentage of total audio time that Americans 13+ devote to various forms of audio, but it also tracks the allocation of that time across all of the various devices we use to listen. The dominant trend of these data is the gradual rise of the mobile device, which has directly cannibalized the time we spend listening to audio on a traditional broadcast AM/FM radio receiver: 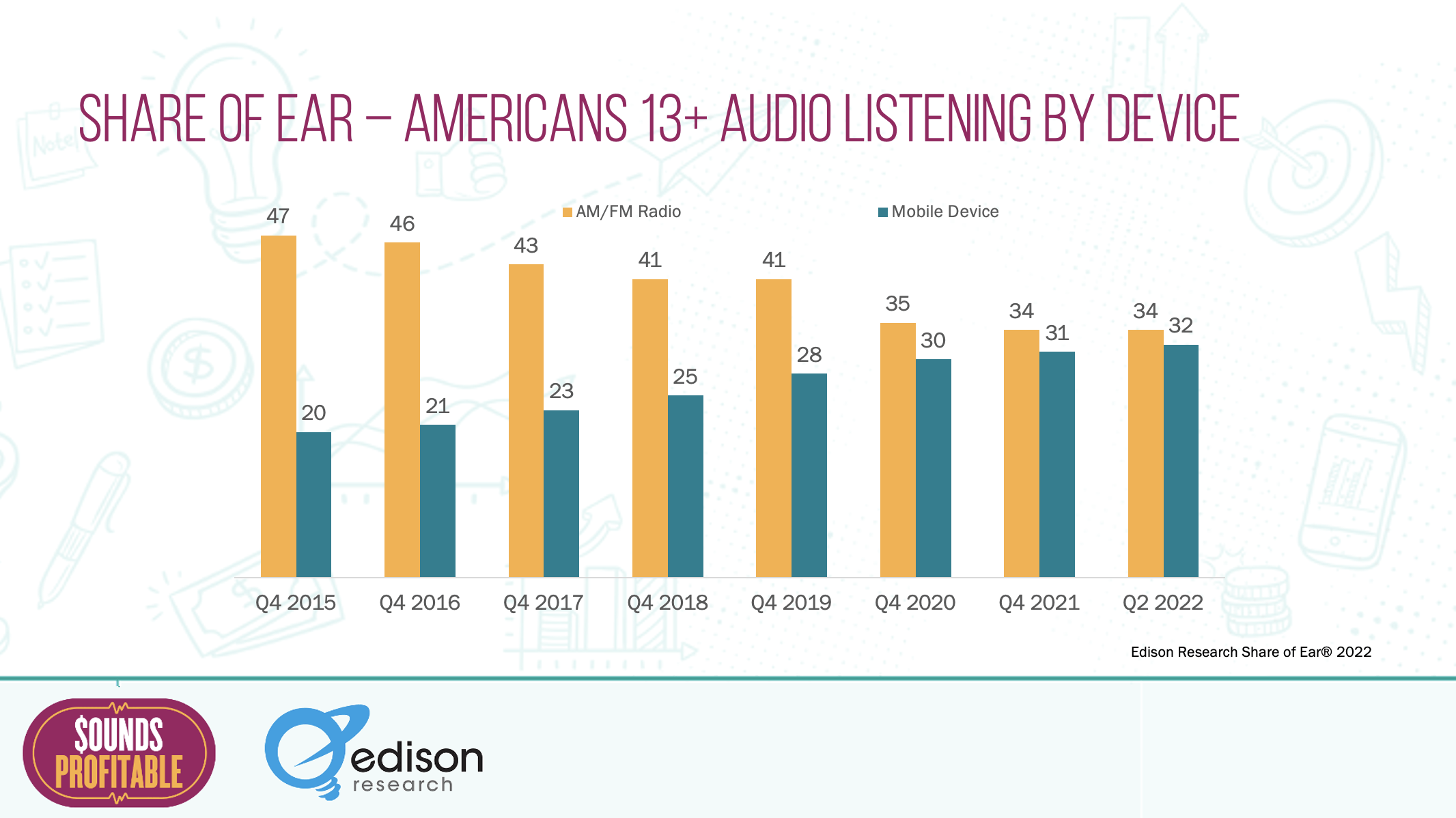 As you can see in the graph above, Americans are very, very close indeed to a true shift in how we listen to audio. While AM/FM receivers housed the plurality of our listening in 2014, they are perilously close to being overtaken by mobile devices: modern smartphones. This flip is highly likely to happen within the next year, if not the next quarter. I am certainly not the only person to write about this, but radio has as much of a hardware problem as it does a “software” issue. Other than your car, it is getting harder and harder to even buy a broadcast radio receiver. Some mobile phones do offer radio tuners, but Apple has famously rebuffed all attempts by radio lobbyists to include one in the iPhone. And so, as you might guess, AM/FM’s Share of Ear on mobile devices is comparatively quite small, indeed--in fact, today that share is markedly smaller than the share allocated to podcast listening on mobile devices: 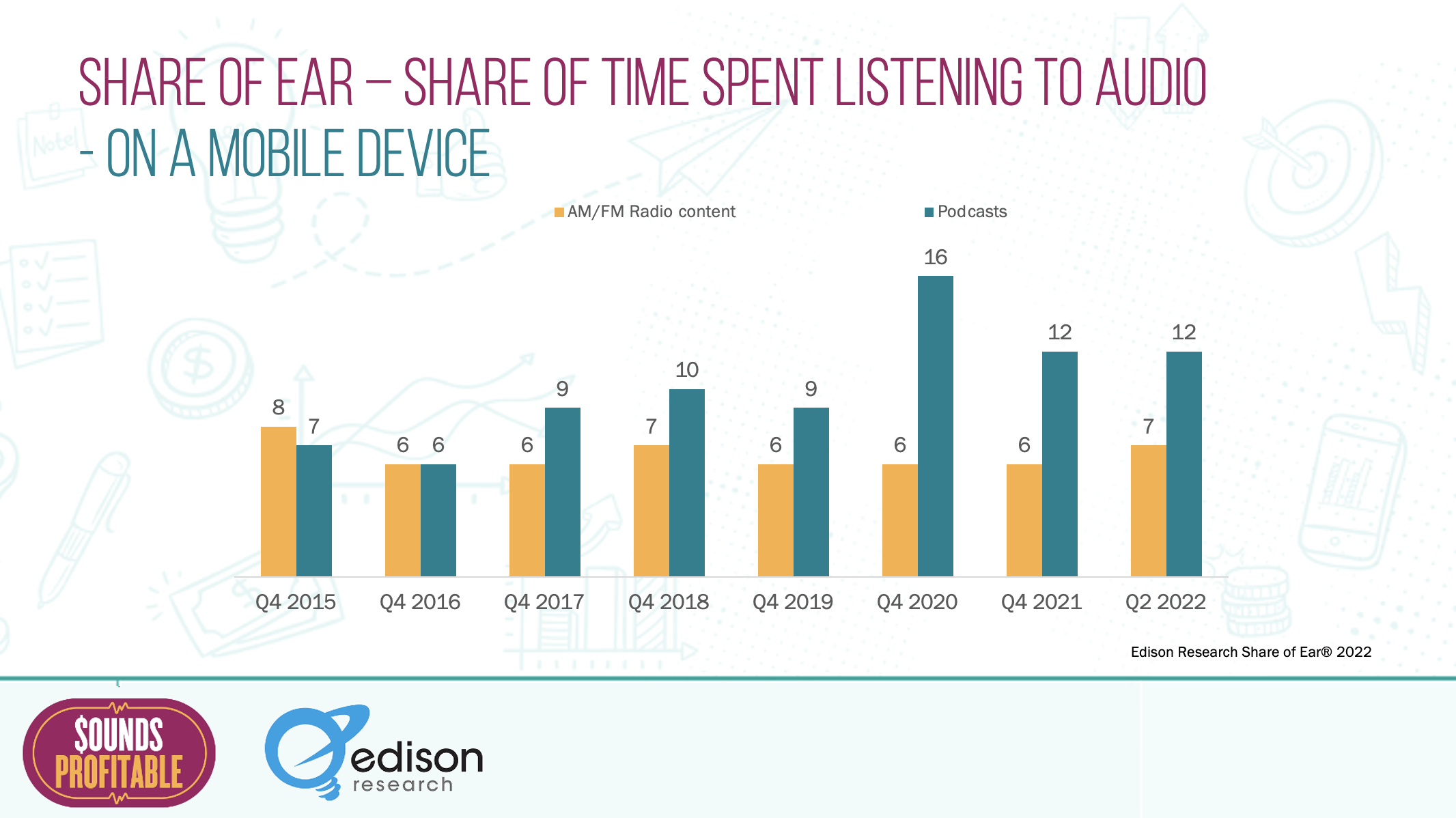 Now, I could very easily turn this into a “radio is doomed” article. But two things are true: one, some of the biggest operators in podcasting are at heart broadcast radio companies. They are in fact playing very competitively in the podcast space as a means to diversify their portfolios. Second, while the eye is drawn to the increase in podcasting over the last eight years (including the “lockdown spike” of 2020), you should also notice what happened to AM/FM’s share of mobile device listening.

I mean, it’s wobbled a bit, but statistically it’s actually flat over the last eight years. Podcasting’s growth on the smartphone has not been at the expense of AM/FM radio. In fact, if you take the share of audio listened to on mobile devices as flat, and the share of all listening on mobile phones as having increased by over 50% in the last eight years, that means that the total amount of AM/FM audio consumed on mobile phones has also grown substantially, right? Perhaps not enough to offset the decline in listening via broadcast receivers, but at the very least it would suggest that AM/FM content on mobile devices isn’t necessarily less viable today than it was in 2014.

Let’s take this back to the podcasting “objection” that I started this article with: that podcasting doesn’t give you anything more than what you can get on the radio. Under what circumstances would that be an advantage, not a disadvantage? When you don’t have access to a radio.

I’ve written and spoken extensively about how podcasting continues to lag with Americans 55+, both in terms of podcast listening, and podcast creation. From a messaging standpoint, it may be that the answer there is less about the content advantages of podcasting, and more about the convenience advantage--the very behavior that got me intrigued as a researcher over 17 years ago: the ability to time shift programming you already like, and make it truly portable.

It seems a simple thing, to those of us who have been in the medium for any length of time. But growing audience 55+ might be as simple as doubling down not on all of the wonderful new things that the audience could discover (at least at first), but rather all the wonderful new places they could listen to what they already want to hear. It’s foundational to podcasting, and something that is easy to overlook.

Speaking of over 17 years ago… 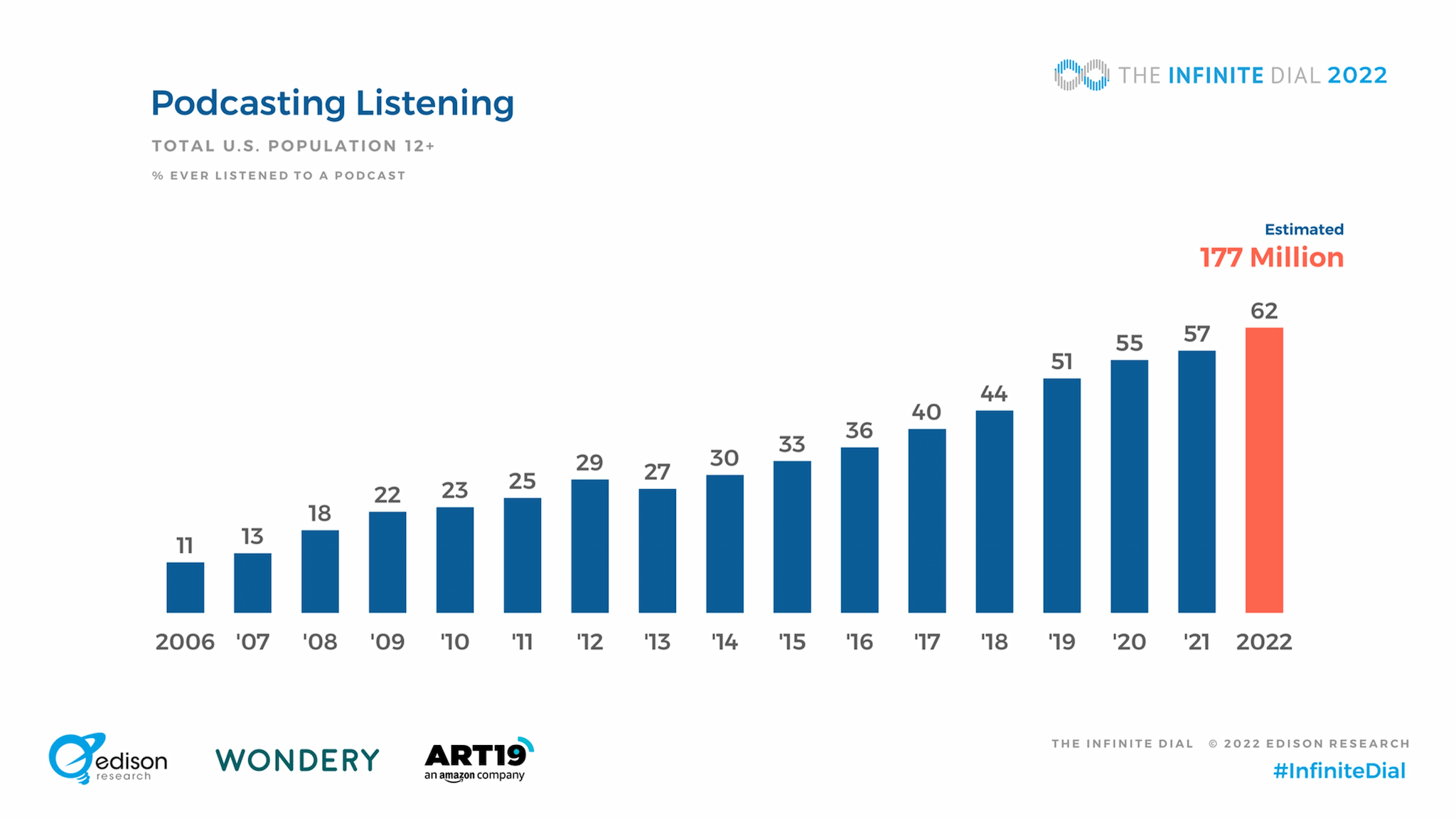 I’ve been in podcasting for every year of this graph. So, as I wrap up my 17th year in the medium and enter my 18th as a partner here at Sounds Profitable, I thought I’d share 17 things I’ve learned from audiences (and from you). I originally shared this as a Twitter thread a few weeks back, and enough of you liked it that I wanted to share it here. Let’s go!

As I enter my 18th year in this wonderful medium, a bonus thought. Lift people up. Be kind. Think about what would make someone’s show even better, not what’s wrong with it. I hope I’m around with stats and jokes for another 18 years.

Catch Arielle Nissenblatt and Tom Webster tomorrow in the Sounds Profitable podcast, recapping their major takeaways from Podcast Movement. This episode was recorded live over Twitter Spaces, and we’d love to hear your feedback on if we should do that more!

Sounds Profitable exists thanks to the continued support of our amazing sponsors. Monthly consulting, free tickets to our quarterly events, sponsor-only webinars, and access to our 500+ person Slack channel are all benefits of sponsoring Sounds Profitable. 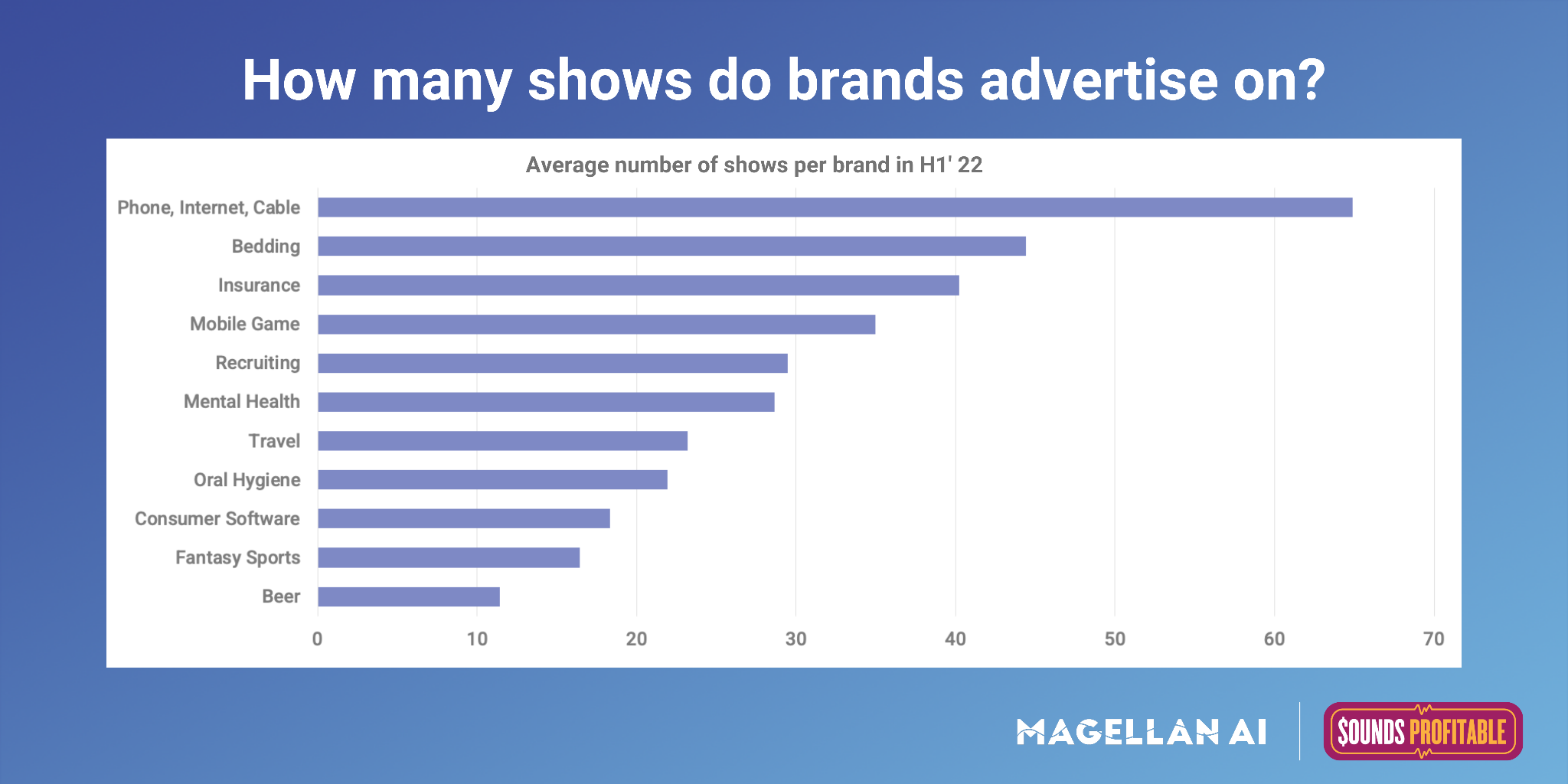 This week we dug into how many shows on average brands advertised on in the first half of 2022. We aggregated the averages by brand industry and selected some industries to highlight on the low, medium, and high end of the scale.

At the top of the list was the Phone, Internet, and Cable industry where major advertisers like AT&T, Comcast, and Verizon contributed to such a high average. Similarly the Bedding industry was close to the top of the list, with brands like Sleep Number, myPillow, and Helix Sleep driving its show volume. Closer to the bottom of the list was the Beer and Fantasy Sports industries. Interestingly these industries primarily advertise on the Sports genre, which might explain why their show volume is on the lower compared to other industries.

Where we caught the ad: TigerBelly

Who else has sponsored this podcast? Brooklinen, ZocDoc, Roman, Athletic Greens

Where else has this brand appeared? Drinkin’ Bros, Broke Girl Therapy, The Raven Effect, The Coffee Breakup

Why it works: The TigerBelly podcast doesn’t hold back and the hosts say exactly what’s on their mind - so, this is an ideal podcast for BetterHelp to sponsor because loyal listeners know that if Bobby Lee is opening up about using (and loving) BetterHelp, he means it. It was also interesting to hear, during the ad-read, that listeners have approached Bobby Lee via Instagram to tell him that they truly appreciated TigerBelly’s partnership with BetterHelp.

This page contains automated links to Apple Podcasts. We may receive a commission for purchases made.