Survey after survey tell us that people continue to discover podcasting every year. But is podcasting growth really a case of three steps forward, two steps back?

Coming August 23rd: After These Messages - Creative Execution in Podcast Advertising. The latest research study from Sounds Profitable. Watch it in person at Podcast Movement or streamed live here.

A couple of months ago, we released our first research project here at Sounds Profitable: The Creators. The response to this project has truly been overwhelming, and we are more inspired than ever to continue to provide the industry with key insights and information to help push podcasting forward.

One graph from The Creators has been gnawing away at the back of my mind, especially since it’s not the first time I’ve seen similar data. We asked our sample of creators when they started listening to podcasts, and this is what they told us: 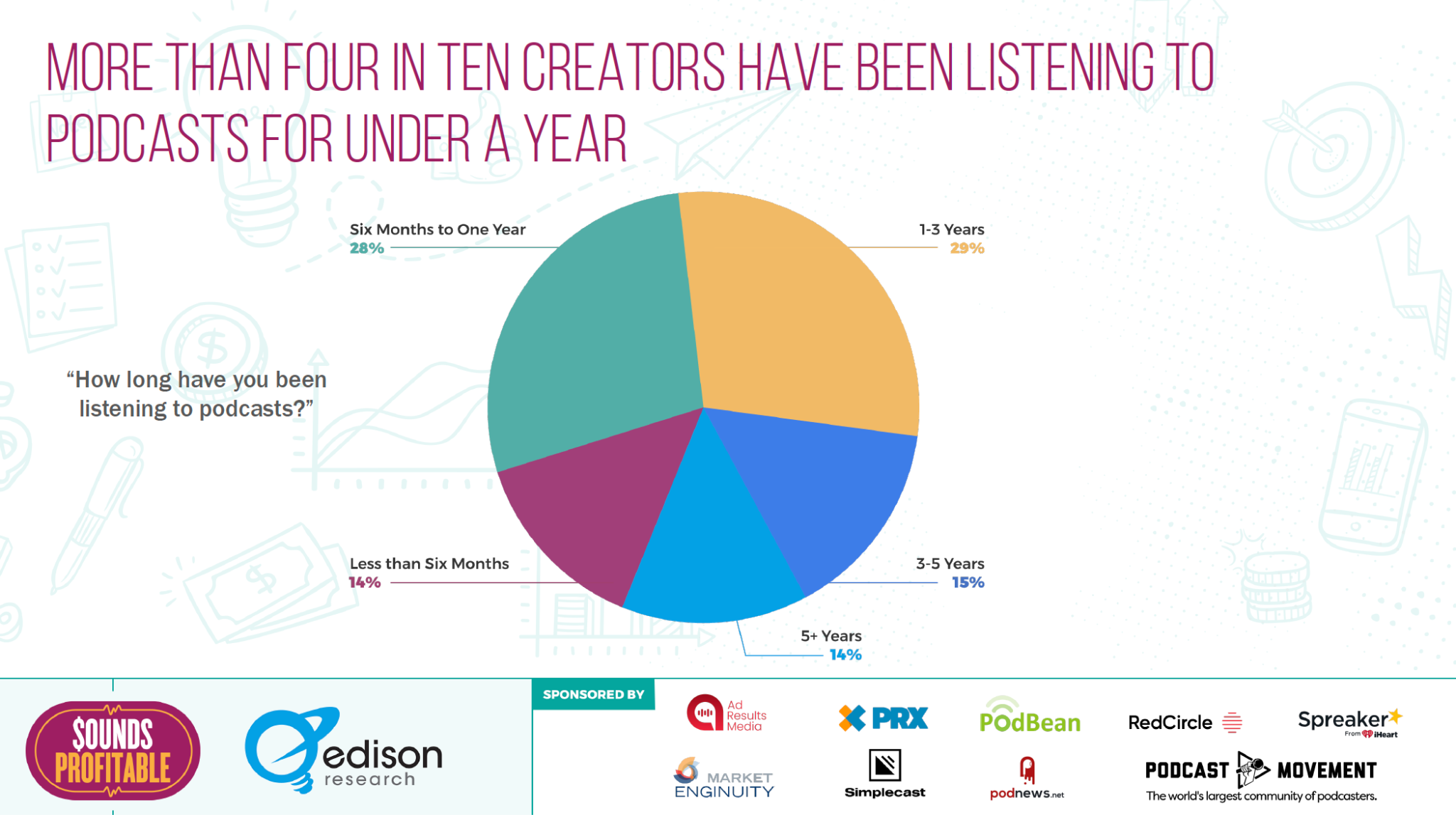 The headline says it all--more than 40% of the people who tell us they have ever worked on producing a podcast are actually fairly new to podcasting. Taken as a data point specific to creators, one implication is that many creators actually came to podcasting as creators first, and not necessarily as regular consumers of podcasts. This is fairly intuitive, and I am sure that many of the million or so Anchor shows extant were created by relative newcomers to the medium.

The thing is, though, that this data point isn’t unique to creators. In fact, I’ve seen it crop up in survey after survey with podcast listeners in general. The last time Edison Research released this for all podcast listeners was in 2019: 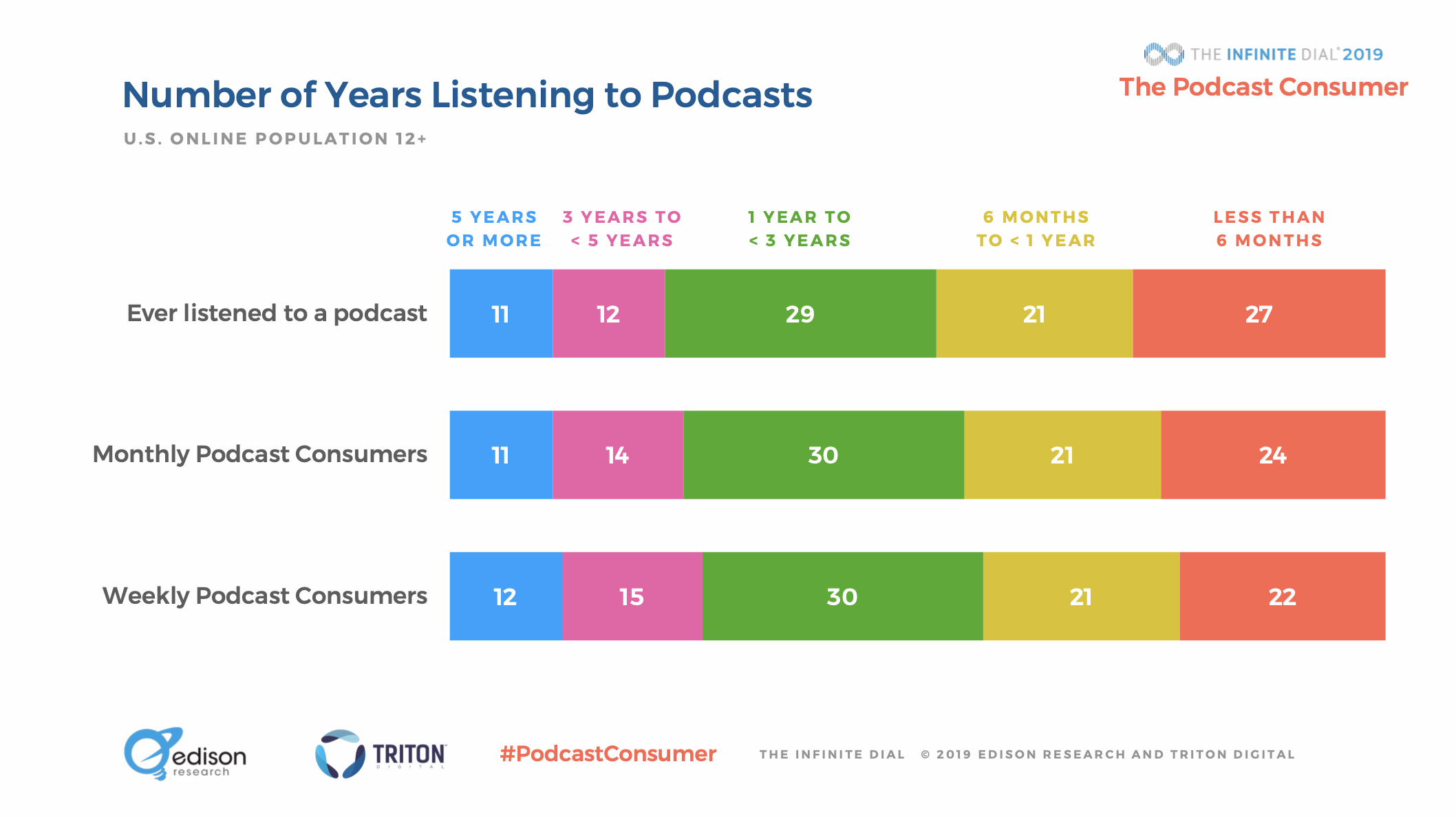 Here, the data shows that 48% of podcast listeners in general have been listening to podcasts for less than a year. And I’ve seen this pattern over and over in multiple public and private research studies. You see it again in last year’s edition of the U.S. Latino Podcast Listener Report: 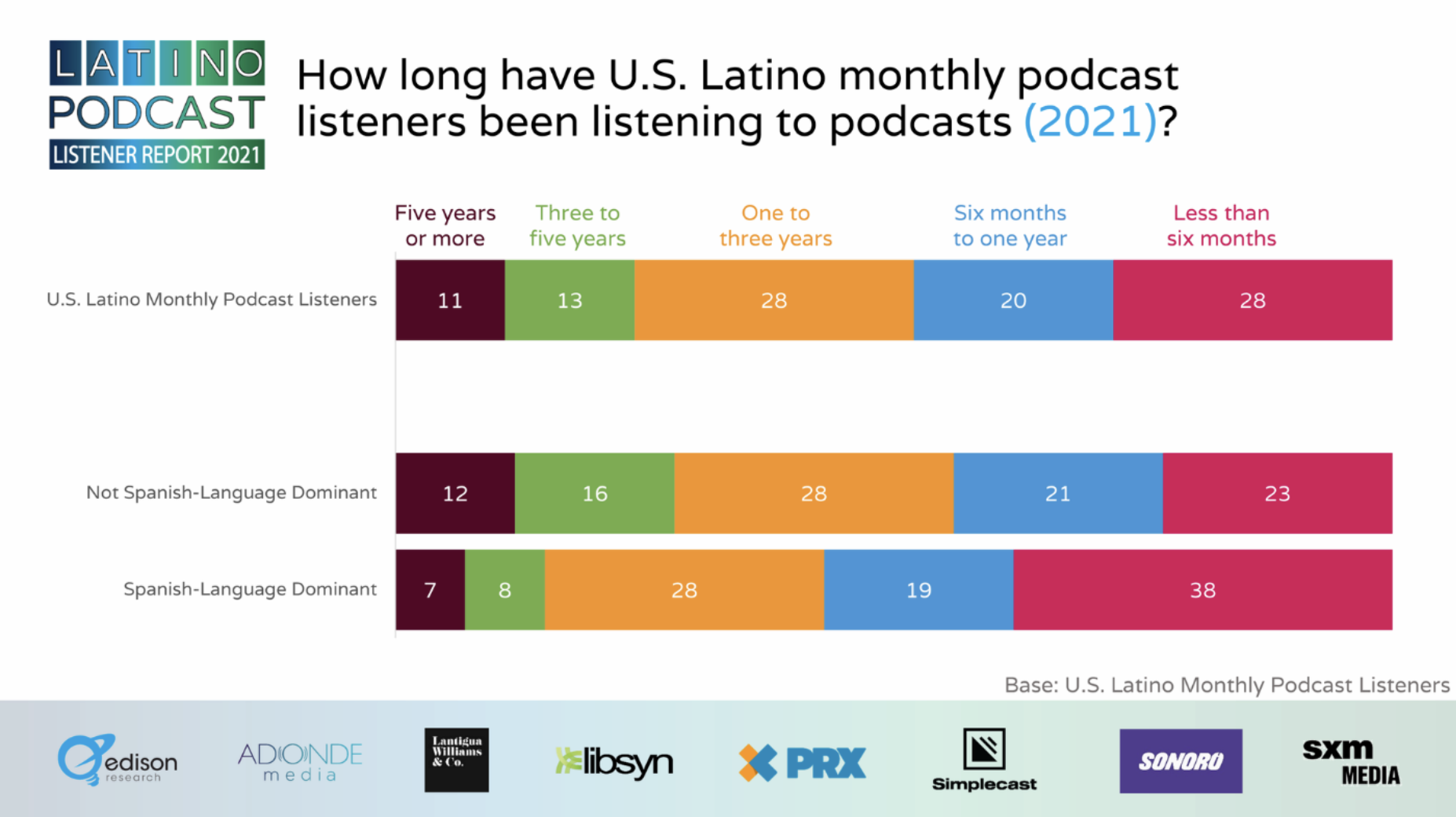 OK, so…what’s the big deal? This is all good news, right? Well, the issue here is that with all of these datapoints indicating that 40+% of regular podcast listeners are fairly new to the medium, you also have to square it with this graph, taken from the most recent Infinite Dial data: 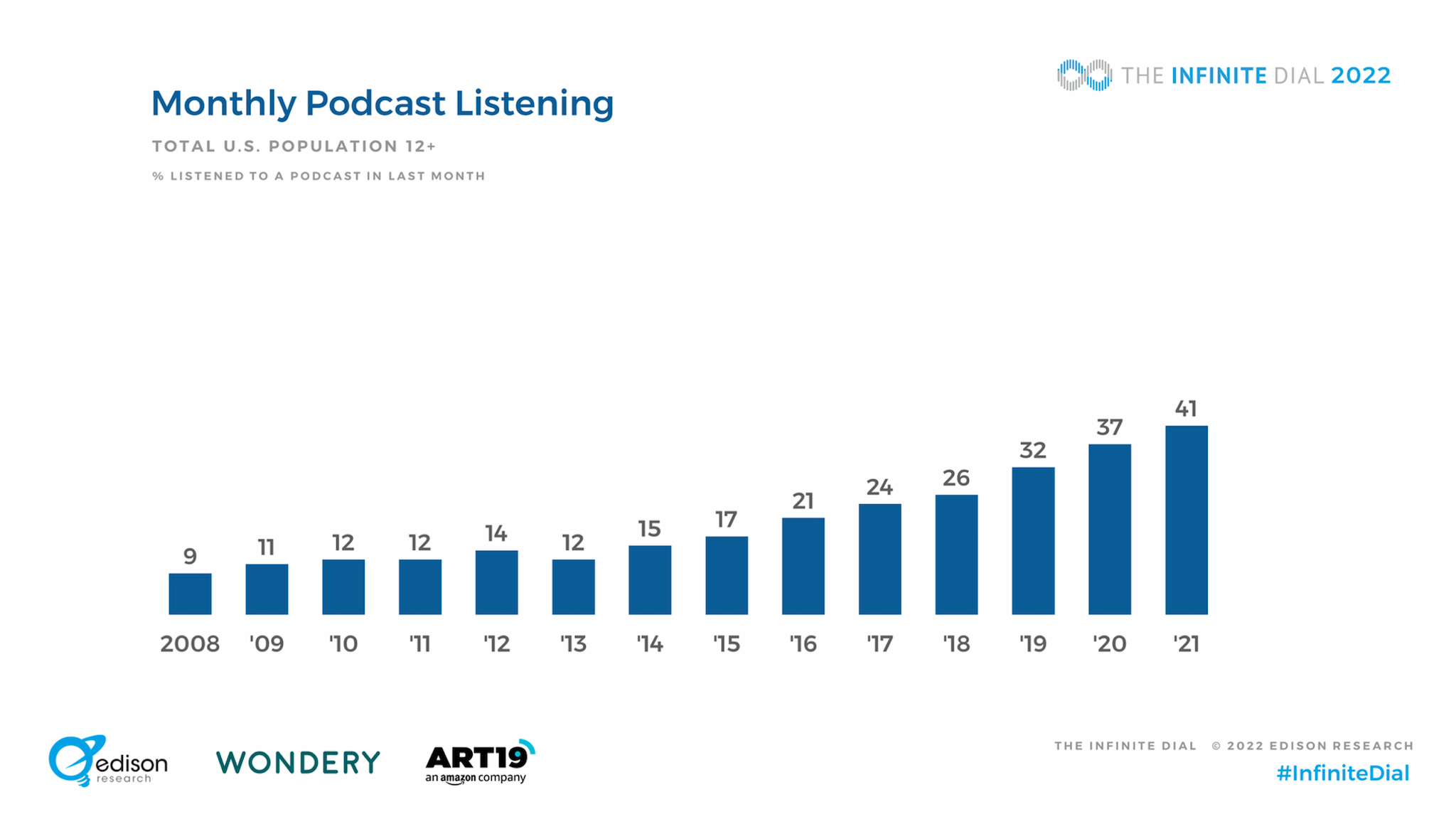 There’s growth, and good solid growth at that. But there is nothing in this chart that hints at such a massive influx of new listeners. If 40% of podcast listeners are new-ish to the medium, we might expect the growth curve here to be a bit sharper, yes?

There is, of course, a logical explanation for this, assuming all of these studies are correct (and, I mean, I worked on them, so I have some confidence…). It’s one word: churn. What these data taken together all suggest is that the inexorable march to the mainstream for podcasting has not been an unfettered climb, but rather a case of continually moving three steps forward and two steps back. And that is the issue that podcasting as an industry really hasn’t confronted yet in any meaningful way: churn.

Churn might be a difficult concept for longtime podcasters to grapple with. After all, we are all fans of the medium, and have made a place for podcasting in our daily habits. That’s true for many listeners who have been around for the last five, ten, or even fifteen years. For us, our next question when a podcast ends is: what is the next podcast? But I submit that this is not true for newer fans of the medium. For them, encountering podcasting in 2020 or 2021 or even this year, they came for a show. When that show is over, or the listener is tired of it, the question newer listeners ask is not “what podcast should I listen to next?” They might not even ask a question at all. TikTok is always there.

I absolutely know people in my extended orbit of friends and family who have dropped off the rolls of podcasting. Maybe they stopped listening to a daily news podcast because

Today, networks have figured out the power of cross-promotion to build audiences for new shows, but if you think about it, you are kinda rolling the dice on one specific show. We assume that fans of unsolved murder case podcast 1 will naturally like unsolved murder case podcast 2, but what if they aren’t that interested? A valuable inventory slot was spent on that promotion, but if the subject of the promoted podcast doesn’t grab, that listener is cut loose, and there is no guarantee that they will listen to another podcast, period.

With that mindset, it might profit publishers to think about doing something else with at least some of that inventory that they really haven’t had to do before. If you operate under the assumption that the listener to your show isn’t looking for a new podcast to listen to, what would you “sell” them? I submit you would promote podcasting itself. And this is a thing the industry really hasn’t done. We got by in earlier times with an audience of people who were fans of the medium. But that won’t get us over the next hump, especially when Steve Martin, Martin Short, and Selena Gomez are teaching us that podcast listeners are, well, kinda dorky.

The topic of listener churn is one we are certainly going to be looking at here at Sounds Profitable, and I am curious what your experiences are with this! You can share them with me at Tom(at)soundsprofitable.com, or if you are one of our wonderful sponsors who are making these lines of inquiry possible for us, corner me at Podcast Movement during our inaugural Sounds Profitable Business Summit, where we will be presenting our latest research study, After These Messages, a definitive look at live/scripted/announcer reads in podcast advertising. Hope to see you there!

Don’t miss Shiv Gupta from U of Digital breaking down the importance of education in the advertising and technology space, and what each of us can do about it, on last weeks Sounds Profitable: Adtech Applied. 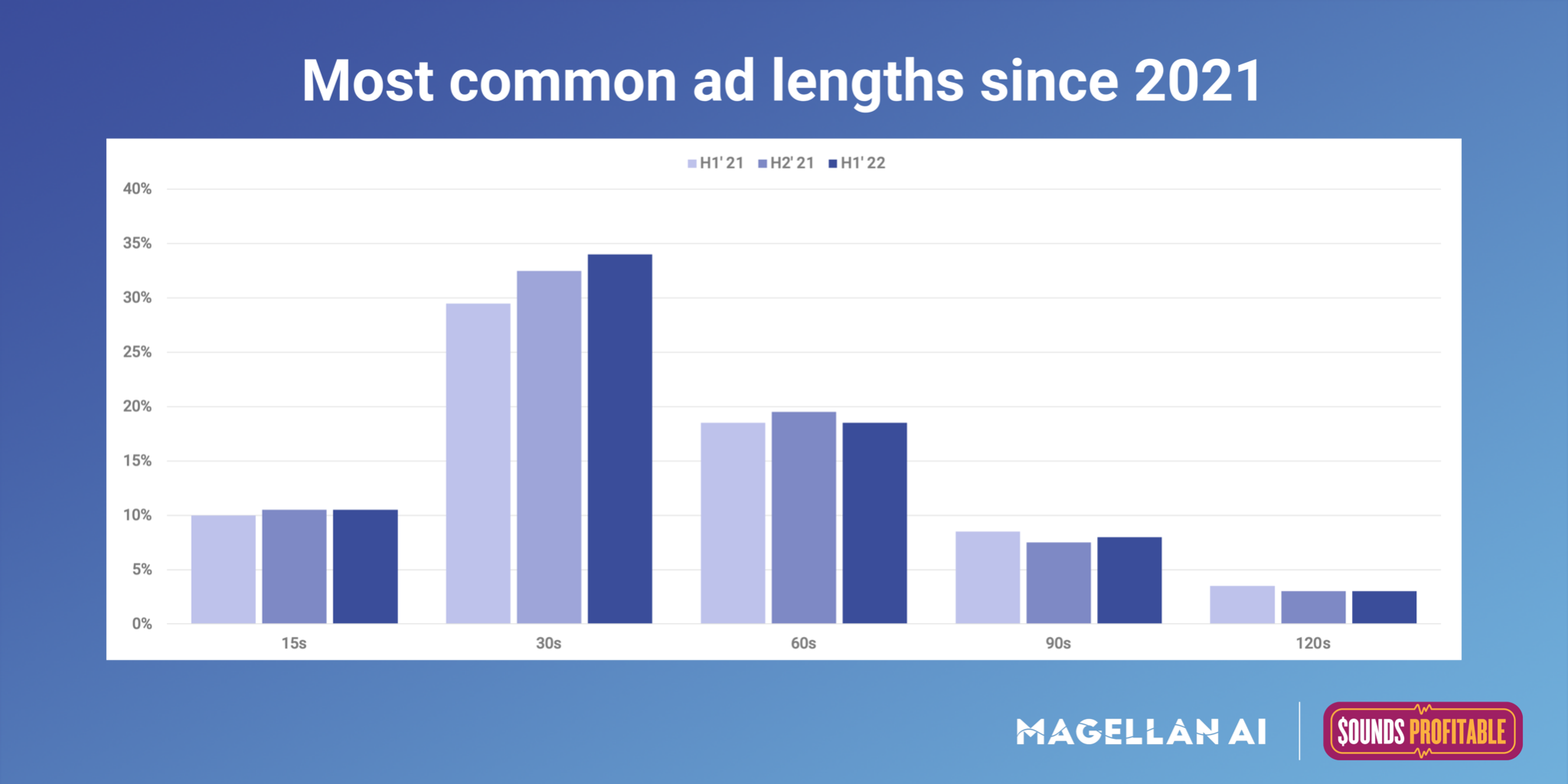 This week we dove into some industry-wide trends relating to the most common ad lengths over the last 18 months. In our analysis we broke out the percentage of ads detected ranging from 15 to 120 seconds. Unsurprisingly we found that 30 second ads have been the most common over the last 18 months. Additionally we detected a slight uptick in percentage of 30 second ads detected, increasing 5% since the beginning of 2021. In contrast, all other ad lengths have slightly decreased since 2021.

Where we caught the ad: Happier in Hollywood

Who else has sponsored this podcast? Sakara Life

Where else has this brand appeared? Outgoing Without Going Out, Your Kickstarter Sucks, The David Pakman Show, That Sounds Fun with Annie F. Downs…any many more.

Why it works: This podcast is all about ‘demystifying Hollywood by making career and personal struggles universal’, so it’s pretty clear why BetterHelp has sponsored it over four times. The hosts strengthen this ad-read by adding “Sarah and I are huge believers in therapy, we both give therapy credit for even being where we are today. I don’t think we’d be successful TV writers without therapy”. This personal anecdote helps connects BetterHelp to the content of the episode/podcast and the hosts.