Programmatic Advertising for Podcasters: How to Get Started

The Summer of Programmatic continues! You may have already decided that programmatic advertising is important, but is it difficult to get started? The answer is…no! And this week, we lay out a simple plan to get you up and running.

The Sounds Profitable Business Leaders Summit at Podcast Movement is two weeks away! Join the 200 attendees from our nearly 100 sponsors discussing the most pressing topics in the podcast industry today. Hit reply to learn more about becoming a Sounds Profitable sponsor and attending the event!

Everywhere you look (or listen) in podcasting, people are talking about programmatic advertising. And that conversation sparks a lot of questions, or even worse, a lot of negative opinions based on misinformation which we aimed to clean up last month.

But the big lingering question for publishers out there considering programmatic is: how exactly do I get set up for it?

Today, we’re going to dig into the different options, processes, and the pros and cons you have to pick from as you’re planning out how your show or network will tackle programmatic.

So, let’s get started.

Starting at the Host

When I’m talking about programmatic advertising in this article, I’m specifically talking about the ability for a publisher to gain full control and access to the operational and functional tools that programmatic advertising brings to the table for their own use. What that ultimately means is the publisher needs access to a supply side platform (SSP), an adserver built to represent their inventory in the great big world of programmatic, or even use that SSP to manage all of their inventory, including what they directly manage and what they make available externally via programmatic options.

So how do you do it on your own?

Today, Simplecast (through Adswizz) and Omny Studio (through Triton Digital) are the only two hosting platforms whose adserver is directly integrated with an SSP that acts as both their direct adserver and their programmatic touchpoint. The value of your host, adserver, and SSP all being able to communicate efficiently with each other cannot be overstated with the flexibility it provides publishers. Publishers pursuing this route will easily be able to have all of their ads, programmatic or direct, compete to provide the best price value for the publisher or to guarantee campaigns that need impressions get impressions regardless of if they’re direct or programmatic.

Alternatively, if you’re on ART 19 or Megaphone, you can still sign up with Adswizz, Triton Digital, or Google Ad Manager, and have them be your SSP—but it’s a bit more complicated, somewhat limited, and may affect performance more than a direct integration. Art 19 and Megaphone provide publishers the ability to build out a campaign, and instead of uploading a single MP3 as an ad creative, they can put a URL in place of the file that makes a request between your adserver and the programmatic adserver (known as a VAST URL). Since each platform handles things a bit differently, you should ask your host specifically about the limitations of using a VAST URL on their platform before moving forward.

ART 19 doesn’t set any limitations on where in the adserving waterfall a VAST-based campaign can be set to run. Megaphone does set limitations, requiring the VAST-based campaign to fill after both your direct-sold and after Megaphone calls to their Spotify Ad Network (SPAN), basically condemning your programmatic offering to backfill, unless you manually turn direct sales and SPAN off. Today, this is the least attractive path to programmatic and should only be pursued by partners prioritizing their relationship with SPAN over a wider programmatic approach.

SSP’s do charge a percentage of the costs of the campaigns that run through them when connecting with demand side platforms (DSP) for a programmatic transaction, usually to the tune of 10% to each side. When run efficiently, that percentage is negligible as programmatic opens up the ability for buyers to more easily purchase inventory, increasing fill and revenue.

So you’re all configured with an SSP, now what?

First off, the next time your sales team gets asked “can we buy your inventory programmatically?”, the answer is immediately yes. And those same sales people can start reaching out to the programmatic ad buyers at the agencies, holding companies, and brands they’re looking to work with.

But what if you need a little bit of help to get spend going through your newly-set-up programmatic pipes?

On Adswizz, you’re able to make your inventory directly available to their Podwave Open Marketplace, which they’re actively in market selling to brands and advertisers, making it a great remnant option for publishers. Adswizz takes a larger fee for Podwave than they do for their SSP services, from both the publisher and the buyer.

Triton Digital’s focus as solely an SSP has them taking a different course, setting up curated private marketplace (PMP) deals with DSPs, displaying the floor CPM and enabling publishers to opt into those deals if they meet the requirements. Triton negotiates a revenue split with the DSPs for these deals, with no added costs passed down to the publisher.

Then there are companies like TargetSpot and Audiology who create PMPs with publishers who they represent programmatically either exclusively or direct. The difference between these solutions and an open marketplace is transparency of inventory and the business relationship. These rep relationships operate more like Advertisecast or True Native Media, where they can sell the inventory direct or bundled, to meet the needs of their buyers.

But ultimately, the most desirable pathway is for the publisher, now set up with an SSP, to develop their own relationship either with programmatic buyers, creating PMP’s and PG’s, to maintain the highest margins possible without reducing CPM.

There is a belief that publisher direct sales will always yield the highest CPMs. And while that may look to be true, I think personally that’s just because we’re doing bad math and accounting for costs in the wrong bucket.

When we think about the SSP and DSP relationship, we need to think about it in the same way we think about paying a CPM for targeting, attribution, surveys, creative costs, sales tools, headcount, and so much more. A $25 CPM isn’t a $25 CPM if you take into account the cost of all of those necessities, so just because programmatic clearly shows you that $25 becomes $20.50 after both the SSP and DSP take their service fees, doesn’t make programmatic a lower CPM. Especially when the tools are built to facilitate faster ad buying, order management, creative approval, and billing.

And when we think about the next layer up of open marketplaces or other forms of programmatic representation on behalf of the publisher, their percentage should also be factored in the same way that we factor in the hard costs of hiring, training, and paying a sales team. Because ultimately, that’s what those services provide.

There’s no shame in needing sales assistance, whether through representation, open marketplace, or any of the such. You’re not getting a lower CPM by choosing those partners, you’re paying for a service that is increasing your revenue, with margins you may or may not like. And ultimately, your feelings on those margins will drive you to either build up a solution to take the entire sales process internally or realize that the costs to do so would greater reduce your net profits.

But calling it a lower CPM is about as accurate as complaining that you only get $1.40 worth of grapes in your $20 bottle of wine. If that argument held water, we’d just be eating grapes.

Publishers looking for direct control of every aspect of their programmatic relationship have a limited number of hosting options and SSP solutions, but thankfully the companies providing them are some of the strongest technology providers in podcasting and greater adtech. By buying into these processes today, more adtech partners will pop up in podcasting, more standards will be introduced, and ultimately more spending will enter podcasting.

SSPs specifically focused on podcasting do considerable work with their DSP integrations to make sure the intricacies of podcasting, such as the delay between winning a the bid and all the ad impression pixels firing being honored instead of timing out. But they do it in silo vs through a clear standard, which we need more of in podcasting.

In the next of this series of article, I’m going to tackle the buyer side, because there are several marketplaces out there that aren’t programmatic, a handful that are, and a swath of additional programmatic inventory from partners that fully host and represent the publishers in aggregate or directly but without giving publishers the control themselves. And lets not forget the growing number of DSPs that are prioritizing podcasting and audio, that all buyers should know about as they choose their tools.

Tomorrow, catch Shiv Gupta from U of Digital breaking down the importance of education in the advertising and technology space, and what each of us can do about it. 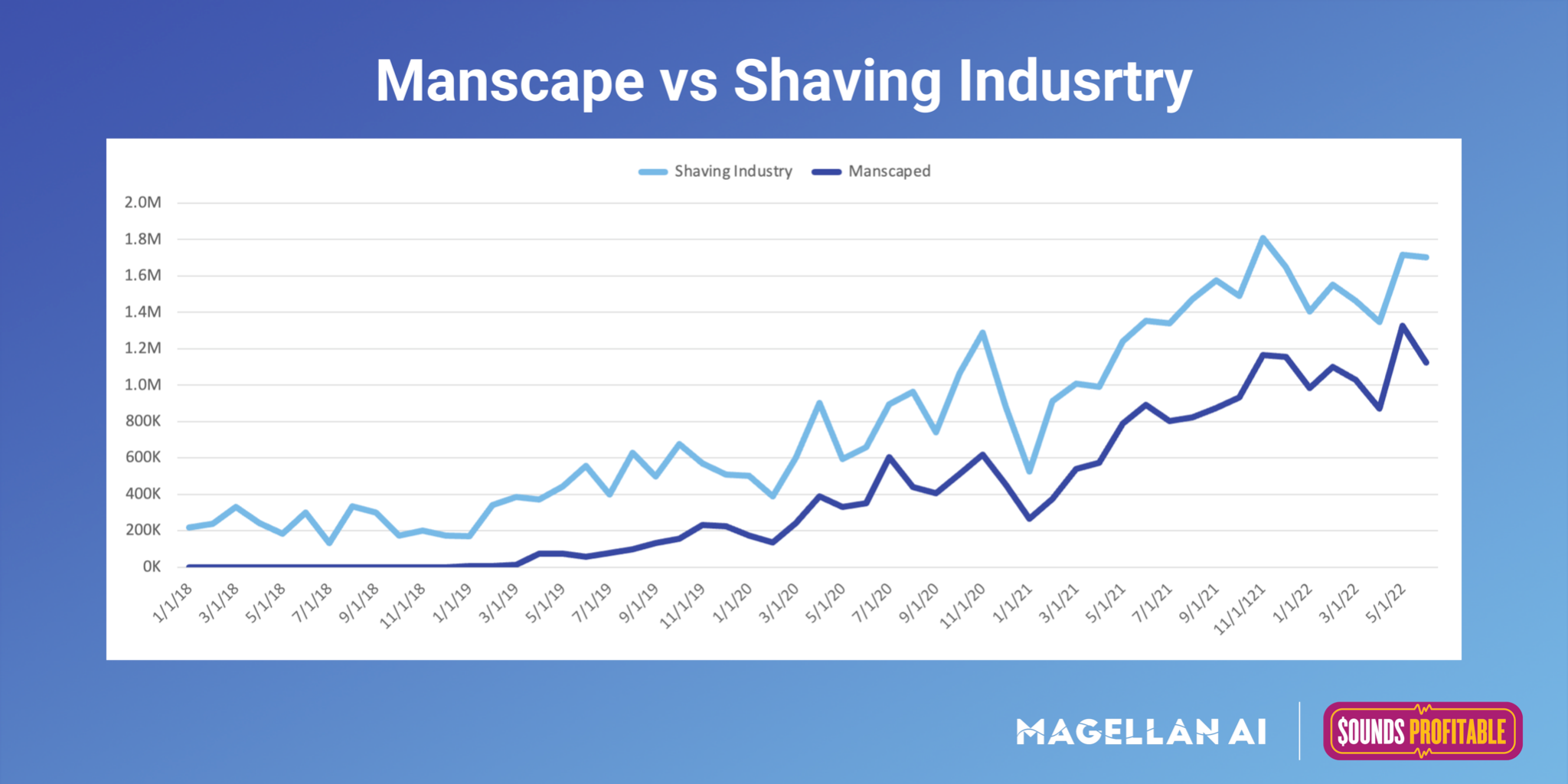 This week we are spotlighting Manscaped, which has been a big player in the podcast space since it first started advertising in 2019. To illustrate the share of the market Manscaped has accumulated for itself, we compared Manscaped’s spend to the overall spend in the Shaving industry.

The Shaving industry on podcasts is relatively small compared to some of the bigger industries. When Manscaped entered the market the Shaving industry was spending around $400k monthly. Now it is spending closer to $1.7mm monthly, with Manscaped accounting for over 65% of it. It just goes to show that despite the podcast advertising space getting more crowded, some brands like Manscaped are still able to carve out a large share of voice for themselves.

For more insights like this Sign up to join the July 15-minute monthly market update on August 18th.

Where we caught the ad: Invest Like a Boss

Who else has sponsored this podcast? Netsuite, NOVO, Flippa, Fundrise

Where else has this brand appeared? The NewsWorthy, Ace on the House, That’s Awesome, Baby Mamas No Drama

Why it works: This podcast is business-oriented and is targeted towards investors, financial insiders, entrepreneurs and CEOs - in short, people who do not have time to deal with lengthy hiring processes. That’s why this is an ideal partnership - Indeed.com is definitely reaching its target audience. What made this ad read even better - the hosts mention that they are giving their listeners a promo code for an offer that is only available for a limited time - makes listeners want to give Indeed.com a try more urgently.